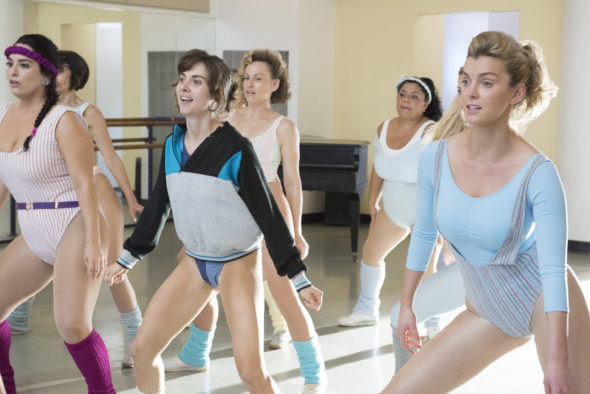 Make way for the Glorious Ladies of Wrestling. Netflix has announced the second season of its GLOW TV show will premiere on Friday, June 29, 2018 at 3:01am ET / 12:01am PT. Watch a teaser and the date announcement, below. Netflix announced the GLOW season two release date today, at its “See What’s Next” event, in Rome.

As Ruth (Alison Brie) and Debbie (Betty Gilpin) settle into the day-to-day of making a season of TV together, they confront lingering issues at the heart of their friendship. Sam (Marc Maron) is still Sam, but now he has a teenage daughter living with him and twenty episodes to churn out. The wrestling is harder, the stakes are higher and the hair is even bigger.

Brie was here in Rome today and commented on the series’ popularity. “It’s really positive. Everyone has something they can relate to,” she said. “We have 14 women on the show,” the former Community and Mad Men star added.

GLOW and the current female empowerment movements colliding “is great timing and is resonating with audiences,” she continued. But, “The stories our show was going to tell would have been the same. MeToo and Times’s Up are things people have been saying behind closed doors for a long time in our industry. It makes me very grateful as an actress to go to work every day. There are women behind and in front of the camera and at the top making decisions. It makes a big difference to feel really seen and heard on set and have ownershp (sic) of yourself.”

What do you think? Are you a GLOW TV show fan? Do you plan to check out the second season, when it drops to Netflix? Let us know, below.