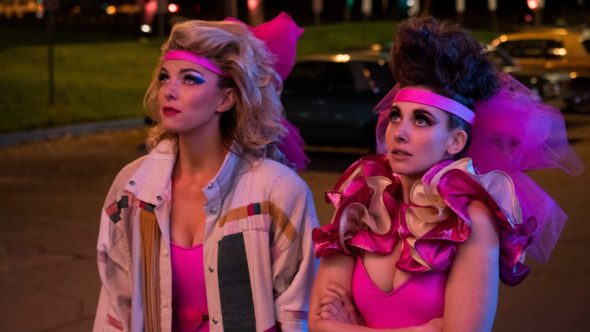 Fans and the cast of GLOW are hoping for a Netflix movie to wrap up the series following its cancellation last year. Netflix had initially renewed the series for a fourth season, but that was reversed due to the pandemic and COVID-19 delays.

Alison Brie, one of the stars of the wrestling series, spoke about the chances of that film happening in a podcast that will be released next week. Per Playlist, she said the following about GLOW:

“I certainly think a [‘GLOW’] movie could tie everything up. Our creators, Liz Flahive and Carly Mensch, are incredible writers. And they’re so devoted to these characters that they created. I think a movie would be a great way to wrap it up.

I’m a little pessimistic about it actually happening just in light of everything that’s gone on this year and how difficult it is to get anything back into production with COVID, and I’m also part of the ‘Community’ cast, who’s been trying to get a movie going for six years, so what I’m saying is don’t hold your breath because if it does happen, it might take a minute.

It’s definitely a bummer. I’m going to miss playing with those incredible women and Marc Maron and Chris Lowell. But you know, we’re so lucky. We’re lucky that we got to make three, to me, perfect seasons of a show. I love it so much and it will live on Netflix forever. So people can still check it out.”

What do you think? Would you have wanted to see the fourth season of the Netflix series? Would you watch a GLOW movie?

It sucks this pandemic is effecting these peoples jobs and doing something a lot of people like. I hope Netflix reconsiders a season 4 or let’s them do a movie. Maybe it would promote a sequel ?

So disappointed GLOW was canceled. This was a unique series with great writing and exceptional acting. It deserves a final season or one last long episode to wrap things up at least. I’ve recommended the show to many but no one likes starting shows that have no ending.

Fans of the show need a proper conclusion. Be it a season 4 or a movie. It just needs a proper ending.

Netflix are stupid for not making a fourth season. The fan base is strong and the profit would make up for the loss

I think it is very dumb to cancel a series after spending money to produce three whole seasons. They should at least make a movie to conclude the story.

No one wanna watch a cancelled TV show, but thousands of people are still looking for TV shows that were concluded many years ago. So concluding GLOW’s story is the right thing to do to make sure that new people will continue to watch this show for years.

GLOW deserves a fourth season. It was an amazing show and so much was left open that it makes the final episode seem so empty. Great writing, casting.. man, Netflix made such a huge mistake this time.

I would love to see them be able to give these wonderful characters the ending they deserve, be it a movie or another season.

Still bitter about GLOW’s cancellation. A movie would give closure, but a fourth season would be better.