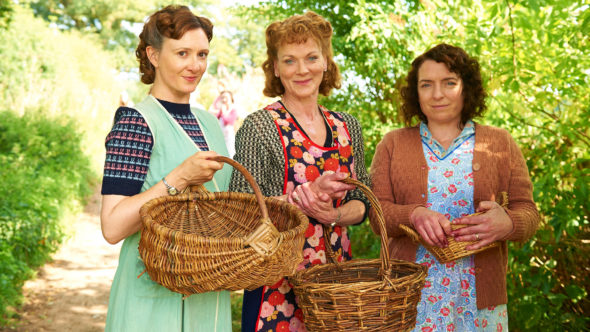 PBS just aired the final episode of Home Fires in the U.S., but is that really it for the TV show? Recently, executive producers Simon Block and Francis Hopkinson spoke with RadioTimes about the cancellation of the UK series.

The period drama, which aired on ITV in the UK, follows the members of the Women’s Institute during World War II. The cast includes Francesca Annis, Daisy Badger, Mark Bazeley, Leanne Best, and Samantha Bond. The show was cancelled last year after only two seasons.

In the interview, Block said he was surprised by ITV‘s decision to cancel Home Fires:

It’s always difficult to gauge how things are going to go so you don’t quite know what the criteria for whether something’s going to carry on or not. It had held its audience, it had won its slots, figures were strong as far as I was told so in that sense I guess it was a surprise in that it went against what we were expecting based on the criteria we were told things get judged by.”

Nevertheless, Block says he’s been touched by the efforts of fans to bring the show back:

I’ve been blown away. When the news came out that it had been cancelled, suddenly everything went ballistic and you really get a sense of how passionately people feel about it. That was really a bit of a shock.”

And what about another season? Hopkinson says they are actively looking for options to bring back Home Fires:

It’s something we’re talking about. I think the audience profile was very good – upmarket and female – and that’s an audience that a lot of advertisers want so there is some interest.”

What do you think? Are you a fan of Home Fires? Do you want the show to come back for another season?

I watched Home Fires during our recent midwest cold spell and it was so great to have something so good to watch.
It needs another season, can’t leave it with the baby crying in the back round.

I really hope some other network or broadcaster will pick up Home Fires and keep it on the air for a VERY LONG TIME!

I’m a big fan of Home Fires and VERY disappointed it was cancelled. If the only option for following this will be books then I will definitely buy them.

Keep Home Fires!!!!! Best show on TV and would really be missed.

Had I known that the programme was cancelled after the first 2 series, I could have at least been prepared for it. Despite thousands of signatures on a petition, I find it unethical for the ruling to still stand, when it was so clearly a very popular & high quality television drama, that many people wished to see. It is cruel to deprive the public in this way, in my opinion, particularly in view of how the second season ended, ie on a cliff-hanger. Bad form & disrespectful to viewers.

Just watched the first two seasons. Hope they can find a way to continue.

I love this show! One of my all time favorites. I adored Downton Abbey and find Home Fires Just as great. Please bring it back. Tell me what to do to continue this excellent series. I’m very attached to the characters and want to know what’s happened to them.

Let’s all sign up on that petition and let’s hope one of the streaming medias revives it.
https://www.change.org/p/itv-itv-must-recommission-homefires

Please sir may we have some more

Absolutely a wonderful show, how could you not be thirsty for more and more…I WANT MORE!!!!! Am sure the books are great…but the TV shows brings it to LIFE!!!!!

Please bring this series BACK….I love it, I am a History Buff of WW2 and found this very well done !!!! And very different !!!!!! PLEASE.

I have found this program on Amazon prime and couldn’t believe that it was cancelled. It so good and enjoyable. I hope that they bring it back on.

Please bring it back. Such great actor and authentic storytelling made it a favourite it our house!

Please bring it back. I looked forward to watching it every week and I have been watching for it to come back.

What!! Cancelled?? How could they cancel with such a cliff hanger. The stories were wonderful and acting superb. Please bring it back.