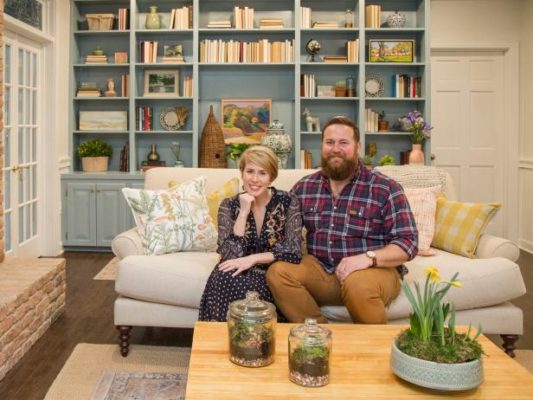 I absolutely love Erin and Ben of Home Town in Laurel, MS., but sad to hear they are moving on to upbuilding in Alabama!! Was actually hoping to move to Laurel and have them upgrade a home for me.

I love Hometown. I tuned on one day as I was channel surfing and found this cute show that is based in my mom’s hometown of Laurel, MS.
This couple is so cute and so talented. I was surprised to see an episode today (November 27, 2020 ) in which they were showing a house that was once owned by my family members, Freddy and Mary Hosey. The next time we come to visit, I would love to meet Ben and Erin.
I look forward to the new season.

I love the passion and authenticity of their
Projects.

If we had the opportunity to move south I believe it would be to Laural! And the work that has been done to the renovated home has been awesome. What a show and it is now on our vacation to see list. Please keep this shoe coming. Ben and Erin have so much talent and their nice to watch. Thank you very much.

WISH THEY WOULD CANCEL WORST PROGRAM ON HGTV

My husband and I both enjoy Home Town and look forward to seeing more episodes!!!

This show is a huge love in my heart. It is great. Soft, loving, family care. I have watched ever episode at least 3-4 times. Love it. Love it

I love this show! It’s the first home renovation show I’ve ever watched !
Who ever planned this show should get a raise!

The furniture Ben builds is a master piece, is this gifted to the home owners? The other furnishings, some appear to be family items Erin uses, this seems to me to make more sense when their “forever home” is shown rather than be stripped of items just put there to make the builders and design teams look good! All the whoop and hollering about how beautiful it is is so fake since its not really their “forever home” on the other shows!
Ben and Erin seem so sincere about making the hometown, home for the new family!

With such a large African American population I don’t see them involved as far as working, home ownership, being a part of what’s happening there!

I love it. It shows the dedication of town residents to bring Laurel back to life and caring to spruce up the forgotten. I love this series. It shows you a warm, inviting place you want to escape, from the overwhelming unforgiving stark big cities. It’s a small part of the world you can be part of a big family of neighbors. I dream of moving there someday.

I’m so happy to hear there will be a fifth season of Home Town. I love the concept of updating many older homes and reviving their town. Living on Long Island we experience both sides of that coin. Small towns blend one into the other along what are now major roadways. There are still many small town communities, but some towns are a bit run down and could use the inspiration Ben and Erin show for upcycling and reuse. If you finish Laurel MS, please recommend a visit to Long Island. We ain’t all living in “the Hamptons” LOL.

Love Hometown and miss it. Enough Property Brothers and Love It or List It. Variety is the spice of life !!