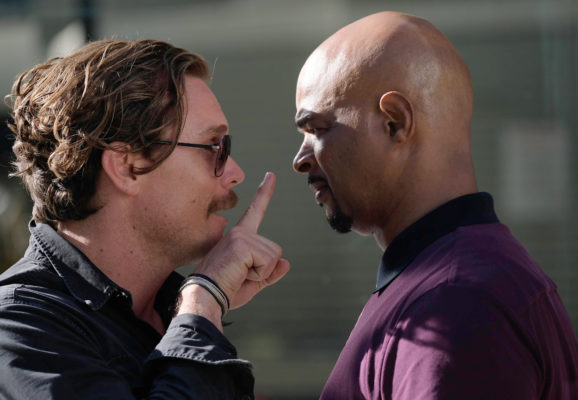 How well does Murtaugh’s partnership with Riggs work out in season two of the Lethal Weapon TV show on FOX? As we all know, the Nielsen ratings typically play a big role in determining whether a TV show like Lethal Weapon is cancelled or renewed for a third season. Unfortunately, most of us do not live in Nielsen households. Because many viewers feel frustrated that their viewing habits and opinions are not considered, we’d like to offer you the chance to rate all the second season episodes of Lethal Weapon for us here.

A FOX buddy cop drama, Lethal Weapon stars Damon Wayans, Clayne Crawford, Keesha Sharp, Kevin Rahm, Jordana Brewster, Johnathan Fernandez,, Dante Brown, Chandler Kinney, and Michelle Mitchenor. The action centers on two very different cops working together on the streets of Los Angeles. While family man Roger Murtaugh (Wayans) has everything to live for, is there nothing Martin Riggs (Crawford) won’t sacrifice to avenge the loss of his family? In season two, Murtaugh tries to support Riggs, while still keeping his own family in mind and trying to avoid the chaos his partner seems to seek.

What do you think? Which season two episodes of the Lethal Weapon TV series do you rate as wonderful, terrible, or somewhere between? Should FOX cancel or renew Lethal Weapon  for a third season? Don’t forget to vote, and share your thoughts, below.

5/13/18 update: FOX has renewed Lethal Weapon for a third season but Clayne Crawford has been replaced. Details here.

This is one of my absolute favorite shows. Wayans and Crawford are perfect. Do not even think about changing them or cancelling this show….please!!!

Love the show. If clayne Crawford is replaced..I’m out.

I’ll give the show a chance and will watch the first episode but I don’t think it will be the same without Crawford..
I agree that Wayans and Crawford were a great team together…..it was sad to see Riggs get shot in the last episode

Love this show!!!! Love Wayans and Crawfords vibe on the show. Cant wait till next year.

we love the show and hope it continues – Clayne is the best part of the show ( Daymon is great too) but if either is gone, so am I

I think if they are going to let go of Clayne Crawford then cancel the show. I and my family and our group of friends will not watch it any longer without him. I am tired of people getting rid of the people I like. So my family and friends have decided that we will boycott everything that was advertised during the show and not support a season 3 . Normally we would not go to these lengths but we really love Clayne Crawford in this part and we are sure we will be able to enjoy him again as… Read more »

My husband and I both LOVE this show. Do not fire Clayne Crawford! He is the best. If you fire him you might as well cancel the whole show and if he is replaced with someone else, we’ll replace your show with something else!

This is the best show on TV…period! Fox, Warner Bros. & the cast of “Lethal Weapon” need to stop acting like spoiled 3 year olds, put on their “Big Boy Pants” & work this out, because “Change” is NOT your “friend”! This show is perfect just the way it is! From all I’ve read since the season finale, it looks like Clayne did all that was asked of him; so why is he still being fired? Clayne Crawford IS “Riggs” & could never be replaced. He & Damon Wayans chemistry on screen just works! You need to FIX THIS NOW… Read more »

Season one was ok. Season two was better to the point I recorded episodes and often chose to watch them over long time favorites. Don’t cancel. I liked seeing Riggs “healing process” and hope he stays.

IF YOU FIRE Clay Crawford there are going to be thousands of people turning the station on tuesday. Him and his partner are great together.SORRY

please DO NOT fire Crawford.. or you gave him his ***** slap so he promises to behave because despite all his messiness, we love him and want to see him get it together.

Please renew! Hilarious, drama, comedy, family… it has all the right components for a hit show! Whats wrong with you Fox??

This above review is as if I had written it myself. I agree with every word. Work it out Fox, this show is worth it! It has done nothing but get better with the development of it’s characters. The show has every element to work long term. Fox has a habit of cancelling really good shows too early. Don’t make the same mistake with this one.

Love this show, it should not be cancelled. Riggs is the best and the show wouldn’t be the same without him.

Should not be cancelled Should re-hire Clayne Crawford