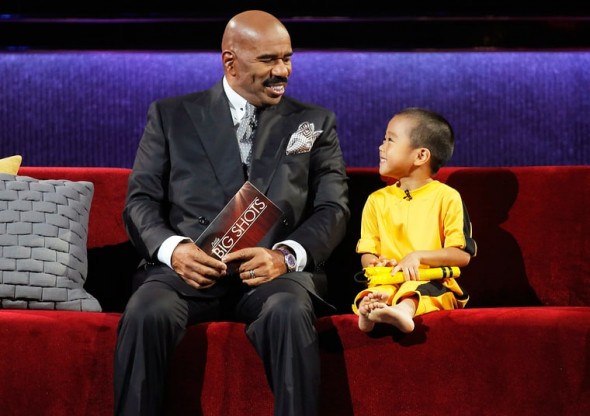 TV show description:
This comedy variety TV show was created by comics and talk show veterans Ellen DeGeneres and Steve Harvey. The latter serves as the host and helps show off “the world’s most talented and extraordinary kids”.

The series showcases children who have various talents — from young musicians, singers, and dancers to every other form of wunderkind in the country. Harvey goes toe-to-toe with them in humorous conversations and interviews. The talented kids also perform and display their unique talents that amaze the audience.

The pint-sized performers seem to prove that talent may indeed be born, not made.

Series Finale:
Episode #TBD
This episode has not aired yet.
First aired: TBDWhat do you think? Do you like the Little Big Shots TV show? Do you think it should be cancelled or renewed for another season?

Great show for families. Hilarious and beautiful… PLEASE RENEW! Let me know the time and station he is moving to..

Great show. Please renew. Better than most of what is on now.

I have really missed the show & keep hoping to see it every week. The show is not only entertaining but inspiring. It is one of the few shows I can watch & recommend to others because it doesn’t include profanity.

This show is fantastic! Everyone in my family watches it – old and young love it. There are very few shows that the entire family can watch together.

This show has brought such a sense of optimism to me for the future of America and of our youth. It is so awesome, and strange as it may be, the kids LOVE Steve Harvey. I certainly hope you continue it in the fall !!!

This is the only TV program my husband and I look forward to watching every week.

I definitely think Little Big Shots should be renewed. It is not only one of the best shows on the air but it is one of the few that families can watch together.

This is one of the most delightful shows on TV. Not only does it display world wide kids’ talents, but interaction with host adds to the enjoyment of the show.
It really serves to bring the world together in a way that supercedes what our ambassadors do.

I would love to Little Big Shots come back for many more seasons!!! My parents who are 86 & 87 love to watch it also! Please bring it back!!!! My dad was wondering why is wasn’t on tonight, I had to tell him it was the end of the season. He really loves the show.

Little Big Shots is a great show for the entire family!

Love the show! It is great for all members of the family! Please renew it!

Definitely renew, Such a Great show for the whole family,

Little Big Shots is a fantastic show that my family and I enjoy watching and we look forward to seeing it every week. It brings a smile to your face and it s a very happy and positive influence in our househole!