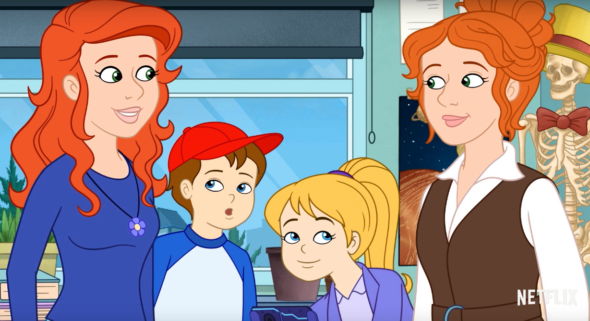 A re-imagining of the ’90s animated series, the reboot will follow the younger sister (Kate McKinnon) of the original Ms. Frizzle (Lily Tomlin) as she uses her magical bus to teach kids about everything from anatomy to deep sea animals.

The Magic School Bus Rides Again premieres on Netflix on September 29th. Check out the new trailer below, which features the new theme song sung by Tony-winner Lin-Manuel Miranda.

The kids are back at Walkerville School for another school year of astonishing, out-of-this-world field trips in this all-new reimagining of the iconic science-comedy-adventure series The Magic School Bus. But this year, there’s a new Frizzle (Kate McKinnon)! The younger sister of the famed Professor Frizzle (Lily Tomlin) has taken over the classroom! But worry not – the new Ms Frizzle shares her sister’s zany ways and passion for science. Field trips this year are wilder than ever, into the clouds, across the internet, riding the continents – even a plunge into the depths of the Sun itself! And along the way, the kids we know and love bring their science investigations into the 21st century – still taking chances, making mistakes and getting messy!”

What do you think? Did you watch The Magic School Bus as a kid? Will you check out the reboot?

i love it my sister jewel allways watch adults movies

I,m surprised that this is n,t shown on the Disney site,not Netflix, which only a few people have.