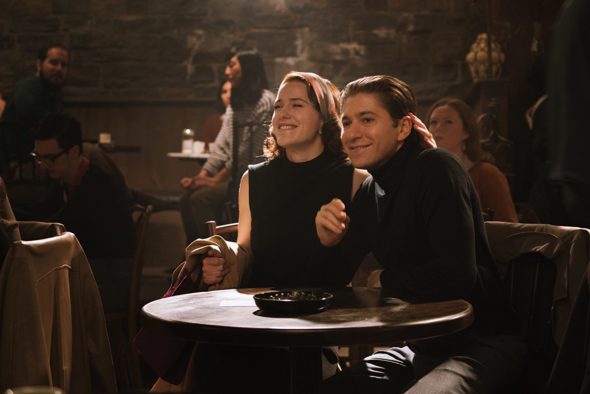 If you watched the Golden Globes award over the weekend and felt like you missed out by not seeing the first season of The Marvelous Mrs. Maisel TV show, Amazon has your back. While the series is already free to customers with an Amazon Prime subscription, this weekend, they’re also making the show free to non-members, too. Since The Marvelous Mrs. Maisel is already renewed for season two, this is a pretty smart move. If you fall for the show (it’s pretty engaging), you’re more likely to subscribe to Amazon Prime (affiliate link).

An Amazon comedy-drama, The Marvelous Mrs. Maisel stars Rachel Brosnahan, Michael Zegen, Alex Borstein, Tony Shalhoub, and Marin Hinkle. The story centers on Miriam “Midge” Maisel (Brosnahan), a wife and homemaker from Upper West Side of NYC, in the late 1950s and early ’60s. After her husband, Joel (Zegen), leaves her, Midge discovers she has a knack for standup comedy and pursues her new dream all the way to The Tonight Show Starring Johnny Carson.

Get the details from this Amazon press release.

In Celebration of Golden Globe Wins, Amazon Prime Video is Making The Marvelous Mrs. Maisel Free to Watch This Weekend — No Membership Required

Starting Friday, January 12 at 12:01am local time and concluding at 11:59pm local time Monday, January 15, everyone can watch Amy Sherman-Palladino’s The Marvelous Mrs. Maisel for free via the Prime Video app for TVs, connected devices and mobile devices, or online at amazon.com/maisel

Rachel Brosnahan won the Golden Globe for Best Actress in a Musical or Comedy TV Series for her role in The Marvelous Mrs. Maisel

SEATTLE–(BUSINESS WIRE)–Jan. 11, 2018– (NASDAQ: AMZN)—Amazon today announced that in celebration of its two Golden Globe wins, it will make the Prime Original The Marvelous Mrs. Maisel available for free for everyone this weekend. Anyone can watch the series at no cost starting Friday, January 12 at 12:01am local time and concluding at 11:59pm local time Monday, January 15, using the Prime Video app for TVs, connected devices including the all-new Fire TV and mobile devices, or online at amazon.com/maisel. For a list of all Prime Video compatible devices visit www.amazon.com/howtostream.

New Yorkers are true fans of the series, which takes place in their hometown. Of the top 30 cities in the US, the place that streamed the most hours per customer of The Marvelous Mrs. Maisel was New York City, followed by Portland and Seattle. More than half of US Prime members who completed the series finished within three days, and the most popular time to start the series was 9pm ET—making it the perfect series to stream over the holiday weekend ahead.

“Big kudos and congrats to Rachel for her first Golden Globe and to Amy for an outstanding first season,” said Greg Hart, Vice President of Prime Video. “We are excited for new viewers to join in the celebration and stream the series for free this weekend.”

Rachel Brosnahan (House of Cards) stars as Miriam “Midge” Maisel, a 1958 New York City woman who has everything she’s ever wanted—the perfect husband, two kids and an elegant Upper West Side apartment perfect for hosting Yom Kippur dinner. But when her life takes a surprise turn, she has to quickly decide what else she’s good at—and going from housewife to stand-up comic is a wild choice to everyone but her.

The series is available in 4K Ultra HD and High Dynamic Range on the all-new Fire TV as well as compatible smart TVs, set top boxes and game consoles. It is also available in HDR10+, a new open standard that leverages dynamic metadata to produce enhanced contrast and colors, on compatible Samsung smart TVs. Prime members can also download the series for offline viewing on iOS, Android and Fire devices at no additional cost.

Every Day Made Better with Prime

Prime was designed to make your life better every single day. Tens of millions of members around the world enjoy the many benefits of Prime. In the U.S. that includes unlimited access to award-winning movies and TV episodes with Prime Video; unlimited access to Prime Music, Audible Channels for Prime, Prime Reading, Prime Photos, Twitch Prime; early access to select Lightning Deals, one free pre-released book a month with Amazon First Reads, and more. Prime was built on the foundation of unlimited fast, free shipping and members receive unlimited Free Two-Day Shipping on more than 100 million items, Prime FREE One-Day Shipping and Prime FREE Same-Day Delivery in more than 8,000 cities and towns, and two-hour delivery with Prime Now in more than 30 major cities. Start a free trial of Amazon Prime at amazon.com/prime.

What do you think? Do you plan to check out The Marvelous Mrs. Maisel TV series for free on Amazon, this weekend? Let us know.

Only the first episode is free, and only if you register with your Amazon account