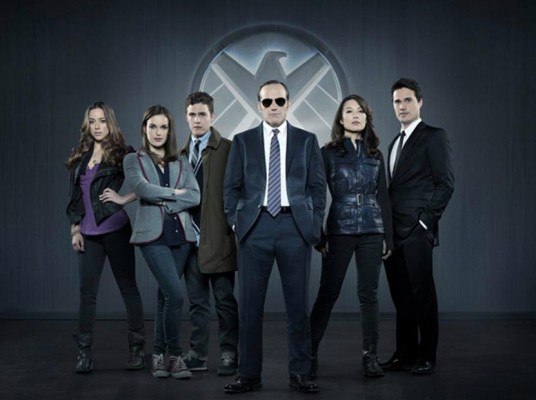 TV show description:
In this action series, it seems that Agent Phil Coulson (Clark Gregg) has returned from the dead (Gregg reprises his role from the Marvel movies). He assembles a small specialized team of Agents from the worldwide law-enforcement organization known as S.H.I.E.L.D. (Strategic Homeland Intervention, Enforcement and Logistics Division).

Coulson believes that a small team of regular people, when working together, can make just as much of a difference as those with superpowers. Together they investigate the new, the strange, and the unknown across the globe, protecting the ordinary from the extraordinary.

Agent Grant Ward (Brett Dalton) is highly trained in combat and espionage but sometimes fails at getting along with his coworkers. Fiercely loyal to the agency, he’s a man of few words who’s always cool under fire and ready for action.

Agent Melinda May (Ming-Na Wen) is an expert pilot and martial artist. Her talents are legendary in the organization but for some reason has resigned herself to a quiet desk job.

A genius engineer, Agent Leo Fitz (Iain De Caestecker) is socially awkward but is always in tune with his research partner and friend — a brilliant biochemist named Jemma Simmons (Elizabeth Henstridge). They’re inseparable and often bicker with one another and neither have any field experience.

A new recruit, Skye (Chloe Bennet) is a hacker with a vast knowledge of computer coding. Unlike the others who work for S.H.I.E.L.D., her background remains a mystery.

Series Finale:
Episode #136
This TV series has not ended yet.
First aired: TBD

What do you think? Do you like the Marvel’s Agents of SHIELD TV series? Do you think it should be ending or renewed for an eighth season?

Great show! The episodes are getting better! Hope it gets renewed

Love the show. I would love to see it renewed.

Love the show.. Hope it returns!!!

I luv it and its getting much better.. humanity is doomed because the attention span in most is weak.

Heres to a second season!

Can this show get any worse? The memorial wall thing was ridiculous. Skye picks out Bucky Barnes? A guy who wasn’t shield but makes an appearance in the new Captain America film? They even say Shield wasn’t founded until after the events of Captain America. Is this level of cross media promotion really worth even the insignificant effort given over to it? Also, in a history that now goes back to WW2 SHIELD has apparantly lost around 250 agents. Given the body counts from Iron Man, Avengers and Thor, and the apparant number of people involved, it was really safe… Read more »

Apparantly, yes, it can get worse.
A change in tone, more action, blah, blah because this was filmed fairly recently, after the producers and “writers” had seen the audience reaction to the earlier episodes, but the show is too flawed for any cosmetic changes to conceal.
So that’s it, no more of this drivel will be entering my home.

I like the show and would like to see it get renewed. They’ll have to be careful with some of the technical liberties they have taken, however, like giving the Bus swiveling engine mounts so it could hover like a Harrier jet. Engine mounts like that would put a lot of stress on the wings and would be difficult to engineer without adding too much weight to the plane. Vectored thrust would have been a more viable option.

Yes I and my hole family love it. This series needs to run for at least 10 years..

I think the show is awesome!

I like the show and think it should be renewed.

I think they should rename it, “The Agent May Show.” or “The Feminist Clap trap Hour” and then cancel it.

The show needs to rethink what it is doing. You can not have a woman looking sexy in a show and never attempting to act that way. It needs to be on at 8pm instead of 7pm so they do not have to worry about family hour. The show also needs writers with imagination. Some things that they thought would be funny have not been.

What’s up with this show. After Buffy, Angel, Firefly, and Dr. Horrible it seems Joss just dosen’t care enough to put real effort into writing or even casting truly exceptional actors for his TV shows. Dollhouse was a snore, and S.H.I.E.L.D. is worse

It better get renewed it looks so amazing