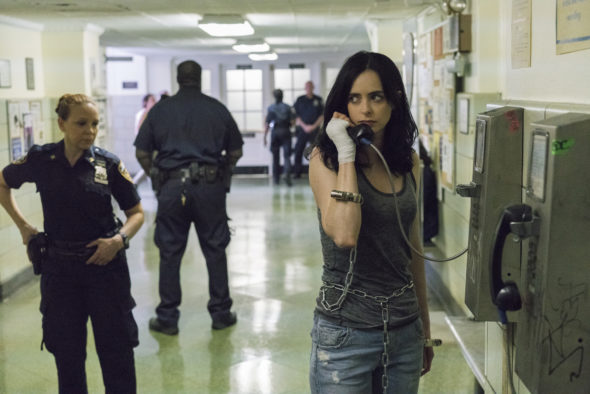 Does our rough and tumble P.I. manage to get it together during the second season of Marvel’s Jessica Jones TV show on Netflix? As we all know, the Nielsen ratings typically play a big role in determining whether TV shows are cancelled or renewed. Netflix and other streaming platforms, however, collect their own data. If you’ve been watching this TV series, we’d love to know how you feel about Marvel’s Jessica Jones season two episodes. We invite you to rate them for us here.

A Netflix superhero drama, Marvel’s Jessica Jones stars Krysten Ritter as Jessica Jones, Hell’s Kitchen’s heavy-drinking, hard-edged detective. The season two cast also includes Rachael Taylor, Carrie-Anne Moss, Eka Darville, Janet McTeer, and J.R. Ramirez. Since Kilgrave (David Tennant) is dead, in the second season, Jessica tries to get her life back on track. However, New York City now knows her as a super-powered killer. When a new case makes her makes her face and who and what she is, Jessica digs deeper into her past, for a better understanding.