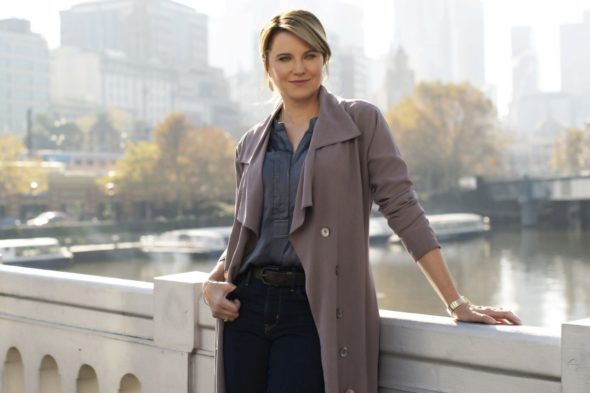 The mysteries continue. Acorn TV just announced the TV show My Life is Murder will return for a second season.

The crime drama stars “Lucy Lawless as private investigator Alexa Crowe, who brings her unique brand of investigation to an unsuspecting New Zealand.”

Season two of My Life is Murder will contain 10 episodes and production is moving from Australia to New Zealand. Here’s more info from Acorn TV:

London, October 29 – Leading UK-based distributor DCD Rights has raised significant production finance and secured distribution rights to a new season of the murder mystery drama series My Life Is Murderstarring Lucy Lawless (Top of the Lake, Spartacus, Xena: Warrior Princess). This new season of the ratings-hit crime dramahas been greenlit by a consortium consisting of AMC Networks’ streaming service Acorn TV, which will take a package of English-speaking rights (North America, the UK and Australia premiere rights with secondary rights for NZ), DCD Rights for rest of world and producer Greenstone TV, with New Zealand broadcaster TVNZ and Network 10 in Australia also on board.

The 10 x 60′ series moves from Melbourne, Australia to Auckland, New Zealand and is currently in pre-production, starring Lucy Lawless alongside her season one cohort Ebony Vagulans (Doctor Doctor, The Letdown, The Furies).

Don Klees, SVP Programming for Acorn TV and Executive Producer, noted, “Acorn TV’s subscribers adored the first season of My Life Is Murder, so we’re thrilled to work with DCD Rights, Greenstone TV and Lucy Lawless on a fun new season. We’re excited to come on board as a production partner for the new episodes and bring the show to even more of our subscribers in new territories.”

Nicky Davies Williams, CEO at DCD Rights, adds, “We have seen strong international success with the first series of My Life Is Murder and we want to build on this with a second. Partnering with Acorn TV, TVNZ, Network 10 and local funding in New Zealand means we have raised the necessary investment to get this highly watchable series straight into production. We know this type of feel-good series is being sought out by many platforms and broadcasters for their viewers at this time and look forward to sharing it with our clients around the world in the coming months.”

Alexa finds herself entangled in compelling new murder mysteries centred on fascinating and dangerous characters who will challenge, flirt with and frustrate Alexa… and sometimes threaten everything she cares about.

There may be new friends and locations to explore, but Alexa’s life is still very much murder. Ably assisted by exuberant Madison Feliciano (Ebony Vagulans), Alexa is ready to use her powers for good and bring her always surprising sleuthing style back at full force in this charming, humorous series. A spectacular new city, ten compelling new crimes and one unstoppable ex-cop… Let the games begin.

My Life Is Murder is a Greenstone TV production for TVNZ, Acorn TV and DCD Rights in association with Network 10.”

What do you think? Have you seen My Life is Murder? Will you watch season two on Acorn TV?

Just started season 1 – very enjoyable – and I am looking forward to enjoying the series and glad it has renewed for season 2 !

I loved the first season and am looking forward to the second!

Good news about the renewal of a series we enjoy on Acorn.

About time!!! I was about to give up on this series. Loved loved it and love Lucy!!! Can’t wait. Been over a year. Any idea when new shows will be on? Thanks

This news made our day!

Adored Season 1 and am so happy there’ll be a second! Will be watching for the announcement for when it will begin on Acorn!

We love My Life Is Murder and are eagerly awaiting Season 2!

We have missed seeing more of this show! Thought we would see additional episodes by now, but really happy that it’s in the works. Lucy and Ebony make a great team, good chemistry! Show is well written, filmed, and acted.

I like the show. It’s nice easy to watch. The main characters really work well together. Look forward to the second season from San Diego, California

I love the show. Both women are great and they have enough differences to make it interesting.

When will it air in the USA? Love Lucy’ lawless!

Will definately watch seeaason two of my Life is Murder. Love the show

Yes! I will definitely watch !!