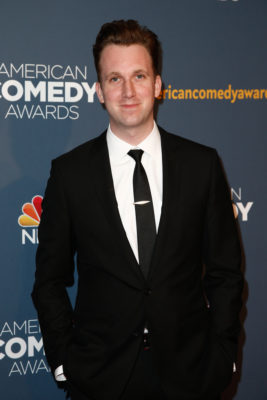 The comedy program will star Klepper as an alt-right media provocateur, satirizing the hyperbolic, conspiracy-laden noise machine that is the alternative-media landscape.”

Said Klepper, “Like the dodgeball captain I once longed to be, I finally got a chance to select a team of fearless warriors who will use their immense skills to shield me from harm. Also, they are wicked talented and a blast to perform with.”

Tim Baltz, a Joliet, Illinois native, cut his teeth as an actor and writer at Second City in Chicago, where he first became acquainted with Jordan Klepper and Laura Grey. Baltz has an extensive television career which includes HBO’s Emmy Award-winning Veep, AMC’s Better Call Saul, NBC’s Parks & Recreation and Superstore, ABC’s Fresh Off The Boat, IFC’s Comedy Bang Bang, and Seeso’s Bajillion Dollar Propertie$. Baltz previously worked with Comedy Central as a series regular on Drunk History. He also co-created and starred in Shrink, which went on to win “Best Comedy Pilot,” and “Critics Award” at the New York Television Festival before being ordered to series by Seeso in 2016. Baltz is represented by CAA and Jordan Tilzer at El Centro Management.

Laura Grey is a writer and performer based in New York. Most recently, she served as head writer on the Comedy Central special Jordan Klepper Solves Guns. She got her start at Chicago’s famed Second City, where she wrote two original revues and was nominated for a Jefferson Award, and then moved to New York where she performed regularly at the UCB Theater. Her series Ex-Girlfiend won the TruTV development award at the New York Television Fest, and she co-created Faeries for IFC’s Comedy Crib. Her pilot, House of Delta (co-written with Megan Stein) was bought by Universal Cable Productions with UCB attached to produce. Her other original work has been featured on Above Average, Go 90, Reductress, SXSW, Slamdance, and the Tribeca Film Festival. She’s appeared in the Sony feature, Rough Night alongside Scarlett Johansson and in Amy Sedaris’ Seriously Distracted. Grey is repped by UTA, Kirsten Ames Management, and Melissa Fox at Hansen, Jacobson et al.

Aaron Jackson performs frequently with various improv teams at the UCB Theatre, including What I Did for Love, Rumpleteaser and We Will Turn You Gay. At the theater, he also co-wrote, Erik Dies, You’re Stupid and We Hate You. Jackson also co-wrote co-starred in the musical F*cking Identical Twins with frequent collaborator, Josh Sharp, at the theater. The show was subsequently optioned as a musical feature by Twentieth Century Fox with Chernin Entertainment on board to produce. Jackson and Sharp also co-created, co-wrote and co-starred in Jared & Ivanka, a Funny-Or-Die web series satirizing the relationship between Jared Kushner and Ivanka Trump. Jackson is represented by UTA.

Josh Sharp has been performing at UCB since 2009. At the UCB, Josh premiered the long-running musical, F*cking Identical Twins, alongside frequent collaborator, Aaron Jackson. F*cking Identical Twins was optioned as a musical feature by Twentieth Century Fox with Chernin Entertainment aboard to produce. Jackson and Sharp also co-created, co-wrote and co-starred in Jared & Ivanka, a Funny-Or-Die web series. Sharp hosts UCB’s monthly experimental comedy show Cool Shit/Weird Shit and was included in Vulture’s 2015 List of “Comics You Should Know” and was named a “Comic to Watch” by Time Out New York in 2014. Sharp is represented by UTA and Kirsten Ames Management.

On television, Kobi Libii has appeared as ‘Cantor Duvid’ on Transparent, Cybersecurity Czar ‘Oliver Shaw’ on CBS’ Madame Secretary, ‘Nick Brady’ on CBS’ Doubt and longsuffering political aide ‘Aaron Stimson’ on Amazon’s Alpha House. Other film and television credits include: Jessica Jones, Girls, Younger, Forever, Next Caller and The Amazing Spiderman 2. He has performed in many New York and regional theatre productions. Kobi studied theater at Yale University and improvisation at Second City Chicago. Libii is represented by Ken Treusch at Bleecker Street and Danielle Quinoa at Stewart Talent.

An alumni of The Second City Chicago, Niccole Thurman has been seen on shows including Superstore, Great News, Loosely Exactly Nicole, and was a co-host for Local USA on PBS for two seasons. Niccole is represented by TalentWorks.

The Opposition w/ Jordan Klepper features Host Jordan Klepper and his team of Citizen Journalists who together satirize the hyperbolic, conspiracy-laden noise machine that is the alternative-media landscape on both the right and left. The Opposition is the voice of the new America. It is the America that defines its own reality. It’s the America of paid protestors, Obama’s birth certificate, and the certainty that CNN is fake news.

Jordan Klepper, Stuart Miller and Trevor Noah are the Executive Producers of The Opposition w/ Jordan Klepper, with Kim Gamble and Ian Berger and as Co-Executive Producers, Owen Parsons as Head Writer, and Russ Armstrong as Senior Writer. Steve Bodow is Consulting Producer. The series will be directed by Chuck O’Neil. Sarah Babineau and Ari Pearce are Executives in Charge of Production for Comedy Central.”

What do you think? Are you a fan of Jordan Klepper from The Daily Show? Will you watch The Opposition?