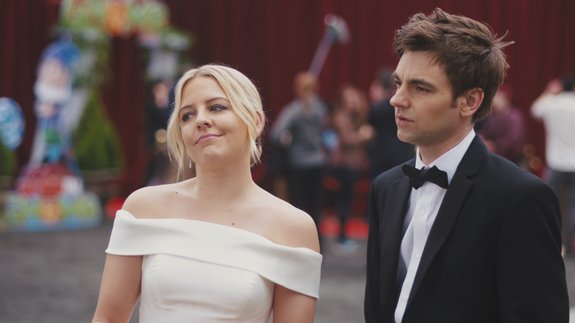 The cast and executive producers of The Other Two TV show received a pleasant surprise today. At the series’ panel at the TCA press tour, Comedy Central boss Kent Alterman announced that the show will be returning for a second season.

A  sitcom, The Other Two stars Drew Tarver, Heléne Yorke, Case Walker, Molly Shannon, and Ken Marino. The comedy centers on 28-year-old struggling actor Cary Dubeck (Tarver) and his 30-year-old sister, Brooke Dubek (Yorke), a former dancer who is struggling with life, when their little brother Chase (Walker), aka “ChaseDreams,” skyrockets to fame, courtesy of the Internet.

The first season of The Other Two is currently averaging a 0.13 rating in the 18-49 demographic and 255,000 viewers. The series debuted January 24th and only three installments have aired thus far.

“The secret sauce is that it’s not just really funny, but a searing, social and cultural commentary,” Alterman said about the series. “It also has so much heart, and none of those things are in opposition to each other.”

What do you think? Do you enjoy The Other Two TV show? Are you glad that Comedy Central has renewed the series for a second season?

I love the show and am very happy to hear there will be as season two!