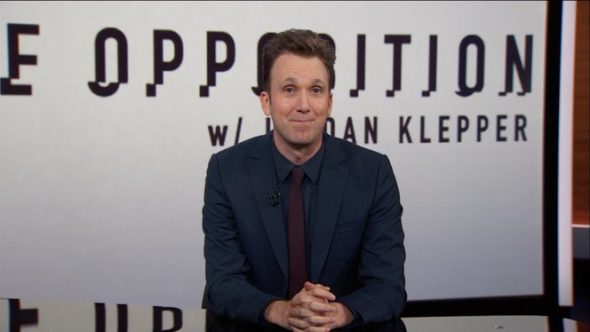 Both good and bad news for fans of Jordan Klepper. Deadline reports Comedy Central has cancelled the TV show after one season but has ordered a new series with the former Daily Show correspondent.

A late-night comedy series, The Opposition starred Klepper as an alt-right media provocateur, satirizing the hyperbolic, conspiracy-laden noise machine that is the alternative-media landscape.”

Althought Comedy Central has cancelled The Opposition, they’ve ordered a new weekly series with Klepper that “will feature the comedian out in the field, traveling the country and speaking to people.”

The final episode of The Opposition with Jordan Klepper will air on June 28th at 11:30 p.m. ET/PT. Klepper’s new series is slated to debut on Comedy Central in 2019.

What do you think? Do you watch The Opposition? Will you watch Klepper’s new series?

I’m very disappointed with the cancellation of the show “The Opposition”. It seems that everytime I like a show it gets cancelled. The same thing happened with “The Nightly Show”. As soon as I looked forward to seeing this show it got cancelled. I don’t know if I want to take a chance and get used to another show and then, all of a sudden, it is gone. Why bother and get disappointed again

I miss The Opposition with Jordan kKepper. It was entertaining and short lived. Watching reruns of South Park gets tedious..night after night. BUT I would rather watch the cartoons- than reruns of The Office and/or Its Sunny in Philadelphia.

I love opposition now and will miss the format. But I love Klepper even mor and can live with it if I’ll see him on a new show,,

nope, not really funny, too politically biased PC to carry the show.