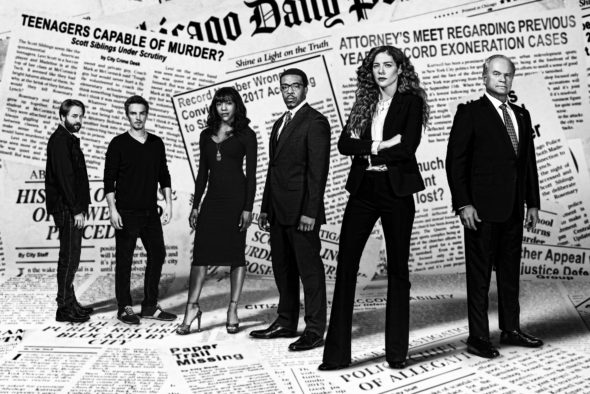 Renewed. This is a great show and hopefully if Fox doesn’t renew it another network will pick it up.

I really enjoyed the show – great actors and story lines, especially the back story. I would respectfully ask FOX to reconsider and continue the show.

I liked it at first but lost interest. SORRY

Please renew presumed innocent. Avery good show with good characters and food for thought. Tv show are falling into a rut of about three to four of the same types and themes

Please renew, great storyline. So many innocent people are incarcerated.

The series should have continued. It was excellent and a clean show with a good story line. There was lots of episodes that could have been created!!!! Bad move….

Very good story lines and I enjoyed the acting and the personal eliminates that the main character added from her past. HOWEVER. WHY DOES EVERY AMERICAN SHOW NOW, HAVE TO PUSH A POLITICAL AGENDA. I made it to episode 5. First 4 episodes push that only black people get wrongly convicted but I thought no maybe the next one will be a white person….well I was right it was…..BUT HE WAS WHITE SUPREMACY…… HOW BUASED DO YOU WANT TO BE. ARE THERE NO WRONGLY CONVICTED WHITE PEOPLE IN AMERICA. After reading 9/10 reviews saying the same thing, I’m not going… Read more »

Truly great concept, so what were they thinking????? Miserable execution with possibly the most cliches per line of dialogue created. And if I had to hear “who killed Rosemary” one more time…I woulda barfed.

Why take it off? Is it because Kelsey Grammer is a conservative? I am!

Please bring back Proven Innocence, it is such a feel good show. Very powerful especially in our Country’s current atmosphere.