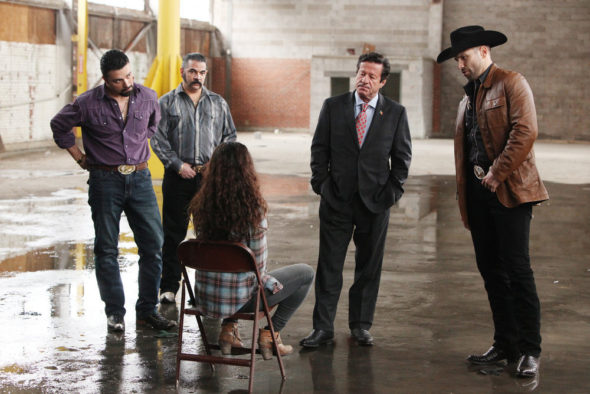 Want to automatically receive updates about this TV show?
Sign up for our FREE email alerts.
n

They can’t cancel it I love it

I will be devastated if Queen of the South is cancelled. I saw the commercials before it started the music and action got my attention. I started watching and fell in love. This is the best show on TV. I follow a group on Facebook for Queen of the South, it is a very passionate group.

Renew. This show is off the chart good.

This serious has been off the hook!!
RENEW RENEW RENEW!!!

Please renew for many more seasons!! My family and I are hooked!! We love the entire cast!! Please don’t cancel!!!!

I can’t imagine that this series will be cancelled. It’s so thrilling and each episode leaves you anxious to see how things will turn out!

This movie is very interesting. It keeps on getting better. I will like it to keep continuing

It was a awesome movie hope there will be a season 3 can’t wait to see it .

Please let there be a season 3

Great show…. I hope it will be back for a Season 3.

Love queen of the south hope there will be as many seasons as suits . It’s very intense.

All the ups and downs I gotta have a season3. I hear it’s not very accurate to the real queen of the South. It may be why some don’t watch it. But I love it!!! It’s a tv show it’s not a biography!! I’ve heard people from Mexico down it because it’s so inaccurate but like I said….it’s not a bio.