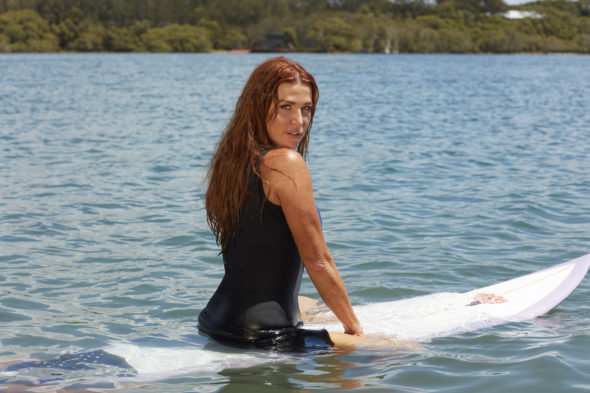 I absolutely love Reef Break!! It’s a wonderful show. It has alot of action and I love the characters in it too! It definitely kept me on my toes and I miss it being on. OH PLEASE RENEW REEF BREAK!!

I did not like the show because of the main character, and the actress who portrayed her. She really ruined it for me with her drinking, her using people, her fake surfing and her boasting. Too bad because I really like her in Unforgettable. The location is beautiful and the other characters are so much fun. My husband enjoyed it, so we watched it, but personally I hope it is cancelled. He says he doesn’t care.

Fyi…Poppy, the main character wasn’t a drinker on the show!! Her ex-husband on the show was the one that had the drinking problem on the show.

Please renew reef break. My husband and I looked forward to the show each week.

This was the best show on the network, please don’t cancel.

I really like this show it would be a loss in my house to have this cancelled. Please keep this show going.

Love to see this show renewed!

Please renew this show! Poppy Montgomery looks awesome and is so cool. The story and characters make you feel like friends and really makes me want to go to the Reef!

PLEASE RENEW Reef Break. It is an excellent series. It’s action packed and fun to watch. There’s humor and serious action. It seems older viewers likes are not considered when renewals are upcoming. Everything is geared toward youth. This show has content for both. Hope it is renewed. Gotta find out where Jake went.

Reef Break is the best! I love all the twists and turns in the story line, the actors/actresses, and the scenery. It is so fun to watch…I don’t even own a tv. My sister, brother-in-law, and I meet each week specifically to see what Cat is up to. The last show of Season 1 had all 3 of us in a state of shock! OMG? What happened? Who kidnapped her? Will she survive the drugged kidnapping? Oh no!!!
PLEASE KEEP THIS GREAT SHOW ON THE AIR!!!

Loved reef break hope it comes back for another season

I love poppy and all the characters live the show. Looked forward to each episode. Clever fun exciting!!