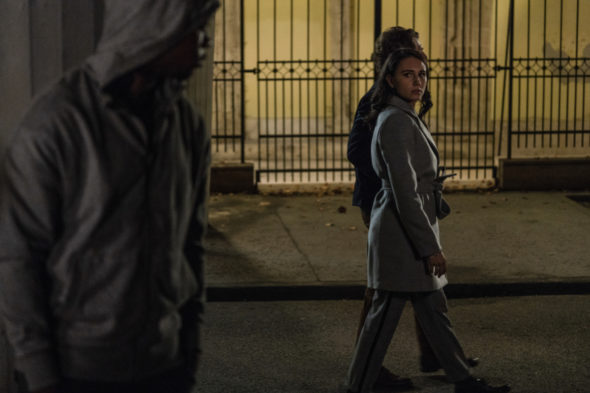 Is Eric Beaumont still getting the job done? Has the Ransom TV show been cancelled or renewed for a fourth season on CBS? The television vulture is watching all the latest TV cancellation and renewal news, so this page is the place to track the status of Ransom, season four. Bookmark it, or subscribe for the latest updates. Remember, the television vulture is watching your shows. Are you?

A CBS crime drama from creators Frank Spotnitz and David Vainola, Ransom stars Luke Roberts, Karen LeBlanc, Brandon Jay McLaren, and Nazneen Contractor. The mystery thriller centers on crisis and hostage negotiator Eric Beaumont (Roberts). He and his team save lives which often seem beyond saving, in part, because Eric understands criminals better than they understand themselves.

The third season of Ransom  averaged a 0.26 rating in the 18-49 demographic and 2.34 million viewers. Compared to season two, that’s up by 1% in the demo and down by 4% in viewership. Find out how Ransom stacks up against the other CBS TV shows.

Will CBS cancel or renew Ransom for season four? Based on the past two years, it seems as if the US Nielsen ratings don’t matter a whit. The series has production partners in Canada, France, and Germany, and reportedly does well internationally so it could be renewed with or without CBS. In the meantime, predicting its chances for a fourth season stateside is a fool’s game, because it has more to do with the network’s profit margin on the show than viewer interest. Still, I’ll keep an eye on the Nielsen ratings, trades, and press releases and update this page with breaking developments. Subscribe for free Ransom cancellation or renewal alerts.

7/3/19 update: The Ransom TV show has been cancelled so there won’t be a fourth season on CBS.

What do you think? Should Ransom have been renewed for season four? Are you sorry that this series has been cancelled?

Ransom is excellent. How could it be cancelled? Who thought that up?

Please, please, don’t cancel Ransom. I love this series and one reason I stick with CBS because of their crime, thriller series. Please renew for 4th season or whatever

Ransom should not have been cancelled. It was an excellent show that I loved. It Keep you on your toes. Please bring back for another season. **** I know a lot of people feel the same way.

It was a good show – too bad. It will probably be replaced with some stupid reality show!

We always enjoyed Random! I hope they decide to put it back on!!

Why do networks cancel great shows??!! Ransom was the only thing worth watching on Saturday night!!!

Why is it they cancel all the good stuff! And keep the inappropriate stuff ? I love this show ! It’s hard to watch the what we used to consider prime channels anymore . We are overloaded with reality crap that’s all fake and inappropriate time slots . Finding shows that you can actually watch with your family is getting harder and harder . Please bring us these kind of shoes back !

Dear Networks, This is a mutiny! We have had it with the seasonal betrayal! We are sick & tired of garbage the goes on forever, while suspenseful, thought-provoking, masterfully written and acted shows are being canceled! It all started over a decade-and-a-half ago with Carnivale (that was a complete and total travesty), and STILL it persists! We are no longer wasting our lives catering to you and watching television that will only end up canceled without a proper send-off and NEVER a “sorry.” Our precious moments are worth WAY more than that! But you high & mighty bureaucrats would never… Read more »

Ransom was an amazing TV show. Wish it wasn’t canceled.

We deserve a 4th season as we were cheated when they pulled it after season 2 and had no advertising when season 3rd was brought about. I did not know about it until I accidentally ran across it over halfway through the 4th season.

Ransom is an awesome show it should definitely be renewed. For season 4. We just love that show

We are just getting S3 here in the UK this month but I will join everyone who wants a S4 renewal even without having seen S3.
It’s a great show and keeps me hooked for the whole hour where I can lose interest in some other shows part way through.
Please bring back Eric and the CriRes team!!!