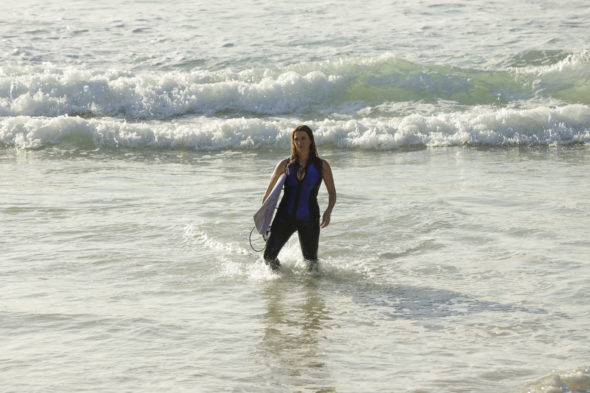 Reef Break airs its season one finale tonight, September 13th, but will there be a second season? Recently, star Poppy Montgomery spoke with TVLine about the future of the ABC TV show.

The action drama Cat Chambers (Montgomery), a former thief who now works as the fixer for the governor of a beautiful Pacific Island paradise — “The Reef.” The cast also includes Ray Stevenson, Desmond Chiam, Melissa Bonne, and Tamala Shelton.

In the interview, Montgomery teased the finale of Reef Break, which debuts on ABC tonight, September 13th, at 9 p.m. ET/PT:

Like I said, there are quite a lot of surprises between Cat and her supposed nemesis, Doug O’Casey. Someone goes missing, and someone gets kidnapped…. There’s a lot going on. There are a lot of cliffhangers and it’s a bit of a wild ride.”

And what about a second season? ABC has yet to renew the summer series and ratings haven’t exactly been stellar. Montgomery says:

You know, I think we’ve got to take a look at the programming of it; there were so many preemptions and blackouts that it’s hard to get a real read on what the numbers were. Also, you get a lot of bang for your buck on this show, meaning it looks beautiful and we are doing it very “efficiently” when it comes to the price. But I also think it’s one of those shows that, given the right exposure, who wouldn’t enjoy it? It’s a fun ride. I think it’s just got to find it’s legs a little. And it’s an international co-production, so once it airs in France, we’ll get a real sense of what it looks like. If it’s a monster hit in France…”

What do you think? Are you watching Reef Break? Would you watch another season?

Yes! I loved what I was able to watch! My Direct Tv/Nexstar blacked it out after 2 episodes!! I got Netflix and finally got caught up!! I love ❤️ Poppy and hope a season 2 is given a chance!!

Definitely will watch. I look forward to each episode.

I love the show and would love several more seasons

Would definitely watch Season 2. Have always loved Poppy Montgomery in different roles, and its fun to watch her play this one with kick ass sass. Also enough action for my husband to enjoy. Please RENEW !!!

This was a nice break from all the police shows that are on during the fall. Don’t get me wrong, I love NCIS and its counterparts, FBI, and all the others, but this was a fun show. Lots of beautiful landscapes in the show and it was easy to watch. I would definitely watch a Season2.

Yes I will definitely watch season 2. It’s a fantastic show with amazing actors.

I would love to see a 2nd season.It definitely left a wild cliffhanger.They can’t leave us hanging like that.

I would definitely watch a second season. I love all the chemistry between the whole cast.

Please don’t cancel this show! I love it!