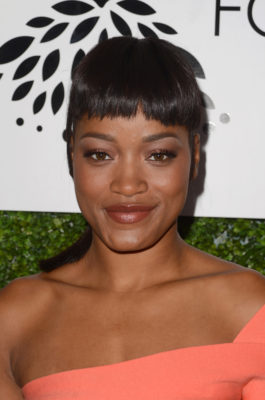 Keke Palmer is having a busy year. This week, MTV announced the Scream Queens star has joined season three of Scream.

As reported earlier, Palmer will also recur on season two of the FOX TV show Star. On the new season of Scream, she’ll be playing “Kym, a rebel with a thousand causes, who is a bold and beautiful social activist with a big heart and zero patience for suffering fools.”

For season three of the MTV series, Palmer will be joined by fellow new cast members RJ Cyler, Jessica Sula, Giorgia Whigham, and Giullian Yao Gioiello. Production on the new season of Scream begins next week. A premiere date has not yet been announced.

MTV and Dimension TV today announced new roles and casting for “Scream” the TV series which begins production this Monday in Atlanta.

Keke Palmer will portray Kym, a rebel with a thousand causes, who is a bold and beautiful social activist with a big heart and zero patience for suffering fools. When Kym and her friends find themselves hunted by a killer, she works to flip the script and survive at any cost.

Keke Palmer most recently stared in Fox’s hit show Scream Queens as Zayday Williams. She began her career with a breakout role in the film “Akeelah and The Bee” and then starred as the title character in the hit cable series “True Jackson, VP,” for which she received four NAACP Image Awards for Outstanding Performance in a Youth/Children’s Program. You can also catch her in the upcoming season of ‘Berlin Station’ this fall on EPIX, the “ratched and rich” recording artist Gigi on Fox’s “Star,” and an exaggerated and comical version of herself on her mockumentary series, “That’s the Gag” for Awesomeness TV – all out this fall. In early 2016, Palmer starred in FOX’s Emmy winning, GREASE: LIVE as “Marty.” She also recently made Broadway history as the first African-American and youngest actress to star in Rodgers and Hammerstein’s iconic 1957 musical, “Cinderella.”

RJ Cyler will portray Deion. A star running back for the high school football team, Deion hopes to secure a college football scholarship that will take him far away from Atlanta, a plan that seems destined to fail when he becomes the target of a masked killer with ties to his past. Someone knows Deion’s darkest secret… and they’ll use it to destroy him.

RJ Cyler made his motion-picture starring debut playing high-school filmmaker Earl in the bittersweet teen dramedy, “Me and Earl and the Dying Girl” opposite Thomas Mann, Olivia Cooke, Nick Offerman and Connie Britton. Following his triumph in “Me and Earl and the Dying Girl,” Cyler completed a costarring role in the big screen Middle East war satire, “War Machine,” which stars Brad Pitt, Will Poulter, Emory Cohen and Topher Grace. He is part of the cast of the second season of HBO’s dark comedy series “Vice Principals,” and also co-stars in the Showtime comedy, “I’m Dying Up Here,” executive produced by Jim Carrey. He is currently seen on the big screen in Liongate’s Saban’s “Power Rangers,” playing the Blue Ranger. He just wrapped two feature films “Sierra Burgess Is A Loser,” a modern retelling of the Cyrano de Bergerac story, and the drug dealer drama “White Boy Rick” opposite Matthew McConaughey.

Jessica Sula will portray Liv, the new girl at school. As a member of the cheer squad and a honor roll student, she seems to have a good head on her shoulders and an ideal life. But as she and Deion grow closer, amidst the murder and mayhem, it soon becomes clear that she has just as many secrets as everyone else.

Welsh-born Jessica Sula is most recently stared in M. Knight Shyamalan’s film “Split” opposite James McAvoy, as well as the independent film “The Lovers” for A24 opposite Debra Winger and Tracy Letts. In the fall, she will be seen in “Goddess,” a six-part Netflix mini-series for Scott Frank. Jessica recently starred as the lead role of ‘Maddie’ in Freeform’s drama series, “Recovery Road.

Giorgia Whigham will portray Beth. Caustic and darkly funny, Beth is the resident Goth girl and a local tattoo artist. As an unapologetic fan of horror films, Beth is outspoken about her encyclopedic knowledge of movie murder… which is sure to come in handy with a killer on the loose.

Giorgia Whigham broke out with her recurring role as Kat on the controversial Netflix teen drama series “13 Reasons Why.” Additional TV credits include “Shameless” (Showtime / John Wells), “Son of Zorn” (Fox / Lord & Miller), “Legend of Master Legend” (Amazon / James Ponsoldt) and “Orville” (Fox / Seth MacFarlane). She will next be seen recurring on the Hulu drama “Chance” with Hugh Laurie and in upcoming films “Saving Zoe” “The Buried Girl” and “Sierra Burgess is a Loser.”

Giullian Yao Gioiello portrays Manny who is openly gay and loyal to a fault. Usually the smartest person in the room, he’s destined to achieve great things. But his wits are put to the test when he suddenly finds himself in the crosshairs of a killer… which makes his simple goal of surviving high school and moving on with his life seem impossible.

Giullian Yao Gioiello is an actor and singer-songwriter who starred in the new Netflix Original Series, “Julie’s Greenroom,” produced by The Jim Henson Company, opposite Julie Andrews. He is also a featured soloist on the cast album. Gioiello played a recurring role on “The Carrie Diaries” for the CW network and a supporting role in the Toronto International Film Festival darling, “Catfight,” opposite Sandra Oh. Other credits include: “Miles, Jack of Red Hearts,” “Bull” for CBS and Nickelodeon’s “Avatar: The Last Airbender Series 1.”

What do you think? Do you watch Scream? Are you excited for the new season?