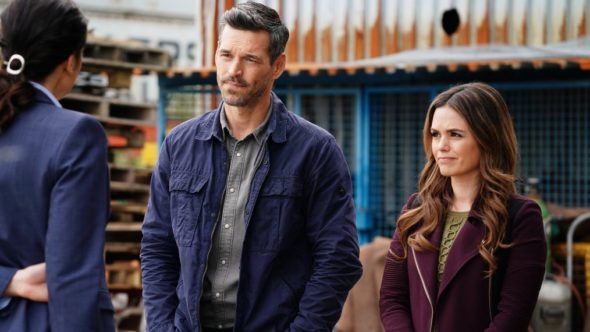 Will Take Two be back for season two? ABC just released new details for the TV show’s upcoming season one finale.

The comedy-drama centers on actress Sam Swift (Rachel Bilson), who, after an epic, viral breakdown has to rehab her image and rebuild her career. She asks to shadow lone-wolf private investigator, Eddie Valetik (Eddie Cibrian), who resents the gig but soon finds her acting experience comes in handy on the job. The cast also includes Xavier de Guzman, Aliyah O’Brien, Alice Lee, and Jordan Gavaris.

ABC has not yet announced a season two renewal for Take Two. So far, ratings for the summer series have been lukewarm, with the show averaging a .44 rating in the 18-49 demo and 2.855 million viewers.

The season one finale of Take Two debuts on ABC on September 13th at 10 p.m. ET/PT.

WHEN A WOMAN IS CONNED OUT OF HER LIFE SAVINGS BY HER FIANCé, SAM AND EDDIE TURN THE TABLES ON THE CON MAN TO GET THE MONEY BACK, ON ABC’S ‘TAKE TWO’

“One to the Heart” – Still wrestling with the emotional reverberations of sleeping together, Sam and Eddie take a case involving a serial con man who victimizes wealthy women. In order to recover their client’s money and jewelry without scaring off their suspect, the pair hatch a plan to con the con man using Sam as bait. But their plan goes awry when they discover they’re not the only ones after the con man and they may be stepping into a trap themselves. As events unfold, Sam’s future and Eddie’s past collide to test their professional and personal relationship that could change everything, on “Take Two,” THURSDAY, SEPT. 13 (10:00-11:00 p.m. EDT), on The ABC Television Network, streaming and on demand.

“One to the Heart” was written by Terri Edda Miller and Andrew W. Marlowe and directed by Holly Dale.

“Take Two” is created and executive produced by Terri Edda Miller and Andrew W. Marlowe, along with Studiocanal TV’s Rola Bauer and Tandem Productions’ Tim Halkin. The pilot was directed by John Terlesky. “TakeTwo” is produced by Tandem Productions and MilMar Pictures in co-production with ABC Studios. “Take Two” was co-developed and co-financed by ABC, VOX and France 2.”

What do you think? Do you watch Take Two? Would you watch a second season?

GREAT SHOW!! My wife and I love watching it together as we wind down for the evenings. We need another season Please!!

Really looked forward to watching this. I know quite a few people who’d like to see this back on the air. Personally not a big Eddie Cibrian fan before this but the acting was good, the plots were light hearted and fun. With the political climate it’s nice to have a show that’s light fun & smart. Kindly reconsider this cancellation. If you’ll remember. ..Friends first season wasn’t out of the ballpark. You need to give the show a legitimate chance to succeed.

ABC had it all with take two. The great writing with humor, action and suspense. Maybe it wasn’t showing at the right time or was up against powerful competition so that it didn’t stand a chance. You didn’t give it a fair start. PLEASE try again or at least sell it to a different network. EDDIE WAS GREAT !!!!

YES, I WATCHED AND LIKED THE SHOW. HOPE THEY CHANGE THEIR MINDS ABOUT CANCELING. IT IS THE ONLY SHOW I WATCHED ON ABC.

I love this show and can’t believe it got low ratings. I love Rachel Bilson and Eddie Cibrian and they are great together. I don’t have streaming services or anything else so I am very upset.

I really liked this show. It was great. What can we do to bring it back. give it another chance. a different time slot or something. there’s a lot of fans for the show. I like everything Rachel does. She does not get enough credit. Hart of Dixie , was great too. It would be nice to have a fun good show like this instead of all these so called ” reality shows” which are so far from reality.

I LOVE this show and I watched EVERY episode! PLEASE RENEW!!!!!

Love this show .Hope it returns If so when???

My husband and I love this show and looked forward to each new episode. We will be so disappointed if they do not come out with season 2. I love the fact that we can watch an interesting tv show without all the extra smut or bad language.

Really enjoyed the chemistry between Eddie and Sam, it deserves another season

This is a really cute, lighthearted and entertaining show. Cast/characters work well together. My husband and I enjoy it very much. Need more of this type of show on TV!