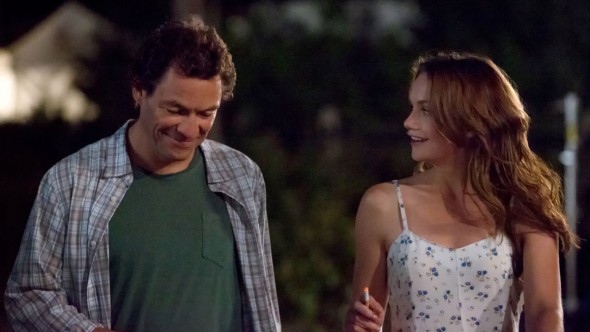 There are at least two sides to every story — and there will be at least two seasons of The Affair on Showtime. The cable channel has renewed their new drama for a second season. The 10 episodes will start airing in 2015.

On The Affair, follows the emotional effects of an extramarital relationship between two troubled married people — a New York City schoolteacher/novelist and a young waitress — and is told from their very different perspectives. The show stars Dominic West, Maura Tierney, Ruth Wilson, and Joshua Jackson.

The series debuted on October 12th to 507,000 viewers in its initial airing. Viewership grew slightly in the second week and has been growing ever since. Last week’s episode drew 692,000 viewers.

The 10th and final installment of the first season of The Affair is expected to air on December 21st.

What do you think? Do you like The Affair TV show on Showtime? Do plan to keep watching?

Can’t wait for season 2. I loved the show and couldn’t wait for each new episode. Ruth Wilson is a very good actress. And pretty in a simple kind of way.

luv it!!!! can’t wait til next season

The Affair is brilliant. Dominic West is beyond fa ulous!! Sexiest man ever. Finally great writing and great acting. I am mind boggled by this series. The entire cast is spot on. Give me Second Season As fast as possible I am going through West Withdrawal…,,

I thought the series was brilliant and captivating. I could not stop watching. I cannot wait for new series. Do you know when it will start showing?.

Love, Love, Love the Affair! Can’t wait until it is on again.

The Affair is outstanding: the acting, writing & production. The absolute best ever TV show. We absolutely adore it & enjoy immensely. Watch with a group every week & then spend week discussing. Compelling story, acting & show!

I love the series I look forward to season two

Yes gripping series, I love it! Can’t wait for the second season, actresses and actors are phenomenal!

The Affair is an incredibly well written and acted series. The characters’ emotions and reactions come off as quite authentic and nuanced where appropriate. It’s plausible enough that any one of them could be in the dilemmas they face individually, but the likelihood that they are all entwined together as they are is something of a stretch. At the end are many loose threads in desperate need of tying up lest we die of curiosity. Nevertheless, the series is addictive and can’t return fast enough. ‘Nice to see Julia Goldani Telles’s (Whitney) career as an actress continuing to blossom.

This show is extremely well written and acted. The emotional nuances are captured with such finesse and subtlety when needed that it would seem the writers and cast either had first hand experience with these situations or knew someone quite well who had. It’s plausible that the characters might individually find themselves in the situations they play, but to have everyone as closely entangled as they are in the show is a bit of a stretch. Nevertheless the series is addictive. The only thing missing so far is an opportunity for Julia Goldani Telles to show a bit of her… Read more »

I find the show the affair gripping, exciting, complex and wonderfully detailed. Its well written and acted. I found it a little funny that the lead character with one look he can have quick sex like a popsicle stick. Maybe its an inside joke or that defines who he is super pop. In any case this story is so additive it begs the question “Can’t you bring back the show quick we are all waiting”. Thank you.

Totally hooked on The Affair – can hardly wait for season 2. Does anyone know when that starts?

Find The Affair psychologically gripping – an intense, suspenseful, well-acted drama. Central characters are multi-dimensional, evolving; sex is anything but gratuitous. Looking forward for many seasons to come.

We just got showtime to watch The Affair and Homeland last week after finding two samples of them on demand.All caught up on The Affair when is it coming back on now

Loved this show! Can’t wait for its return 🙂