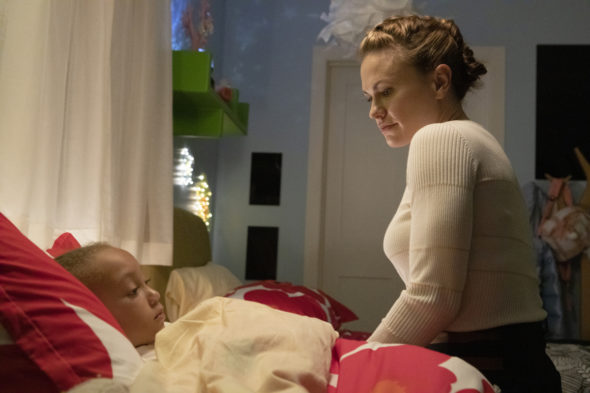 Is it finally put to bed? Has The Affair TV show been cancelled or renewed for a sixth season on Showtime? The television vulture is watching all the latest cancellation and renewal news, so this page is the place to track the status of The Affair, season six. Bookmark it, or subscribe for the latest updates. Remember, the television vulture is watching your shows. Are you?

A Showtime drama, season five of The Affair stars Dominic West, Maura Tierney, Julia Goldani Telles, Jadon Sand, Sanaa Lathan, and Anna Paquin. The series explores the consequences of an affair that destroyed two marriages, as well as the crime that reunites the people involved. This season, everyone must face the past, in order to fix the future. Guest stars include Jennifer Jason Leigh, Claes Bang, Lyric Bent, and Russell Hornsby.

The fifth season of The Affair averaged a 0.05 rating in the 18-49 demographic and 405,000 viewers. Compared to season four, that’s down by 42% and 22%, respectively. Learn how The Affair stacks up against the other Showtime TV shows.

There’s no need to figure out whether Showtime cancel or renew The Affair for season six. Since this is the fifth and final season, just sit back and enjoy the show. I’ll still keep an eye on the Nielsens and update this page with any developments, so subscribe for free news alerts on The Affair.

What do you think? Is season five the right time to end The Affair TV series on Showtime? If it were up to you, would The Affair be cancelled or renewed for season six?

No i do not want it to end cery good and deep tv series… Please keep it coming!

Please, season 6 this was the best series for so many reasons . Not ready to end it loved everyone and the story

Please, bring season 6… So much more story to tell!!

Brilliant writing and some of the best stories, character development and acting being done. Season 5 has been so engaging. Sorry to hear no season 6… would love to see story gap filled in especially for Helen and Noah. Loved that Noah was reading Stacey’s novel at Helen’s grave. So affirming to see Noah still dancing at the end in that beautiful setting. Loved the positive aspects of truly living life —though flawed — and that the journey continues even when the sojourners have come and gone.

It should have been canceled after the 4th season.