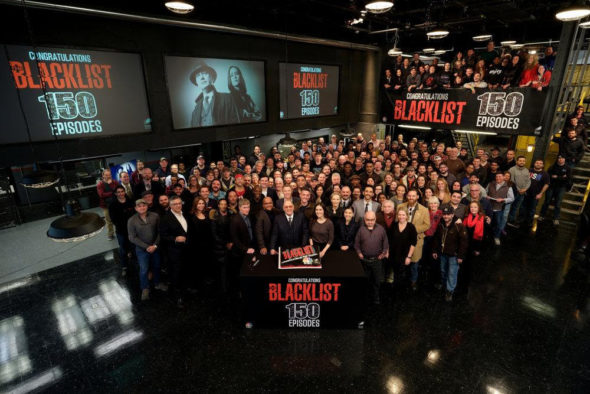 The cast and crew of The Blacklist TV show had reason to celebrate today on their New York soundstages. Not only did the NBC series reach a milestone of filming 150 episodes but, the Friday night drama was also renewed for an eighth season (2020-21). Season seven resumes on Friday, March 20th.

MEDIA ALERT: NBC RENEWS ‘THE BLACKLIST’ FOR SEASON 8
NBC has renewed its esteemed drama series “The Blacklist” for an eighth season.
The seventh season will resume Friday, March 20 at 8 p.m. ET/PT with two back-to-back episodes.

“Congratulations to our incredible cast, producers and crew, all of whom continue to reach excellence week in and week out,” said Lisa Katz and Tracey Pakosta, Co-Presidents of Scripted Programming, NBC Entertainment. “We couldn’t be more excited to continue Red and Liz’s story into season eight.”

“‘The Blacklist’ continues to tell exciting and imaginative stories,” said Chris Parnell, Co-President, Sony Pictures Television. “It’s due to the brilliant cast, crew and our writing staff, led by Jon Bokenkamp and John Eisendrath, who commit to unparalleled creativity. Wait until you see what’s in store for season eight. Thank you to Lisa Katz, Tracey Pakosta, Pearlena Igbokwe and all of our partners at NBC and Universal Television.”

Currently in its seventh season, “The Blacklist” is averaging a 1.1 rating in adults 18-49 and 6.6 million viewers overall in “live plus seven day” Nielsens to tie as the season’s #1 Friday drama in most current 18-49 season standings. With the addition of digital and linear delayed viewing to date, the show’s Oct. 4 season premiere has grown to a 1.6 in 18-49 and 8.1 million viewers.

“The Blacklist” is produced by Sony Pictures Television and Universal Television in association with Davis Entertainment.

What do you think? Do you enjoy The Blacklist TV series on NBC? Will you watch season eight? Should that be the final season?

Great show. Hope it goes on for a long time. can’t wait till Friday.

Greatest show on TV. Whole family loves it and never misses and episode. Keep making The Blacklist and we will always watch !!

I will watch all the seasons and shows that they can produce!

I will watch as many as are produced. I hope there are many more to look forward to.

I will look forward to as many seasons as will be created ,and hope there will be many more!

We love The Blacklist. Delighted it will have another season.