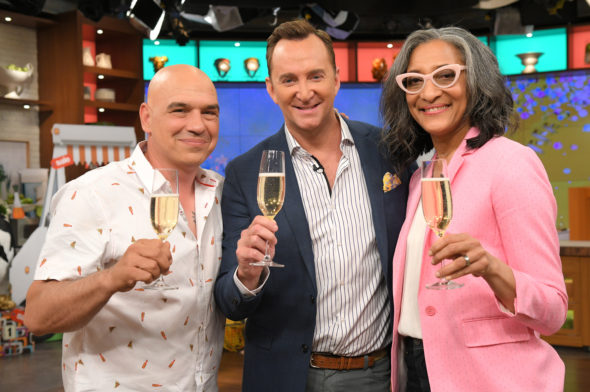 I am very sad to see the chew leave. I think it is a very entertaining show. I learn alot and I am going to miss it. It is refreshing to see something other than a reality show
Michael Symon is sexy…lol

The Chew is a happy and entertaining show and I have learned so much about cooking. I cannot believe you would cancel such a fun and wholesome show and leave on some of the stupid ones and politically oriented ones.

I am sad and shocked that ABC is canceling the show. I watch it every day. I hope another Network picks it up.

Very upset The Chew was cancelled. I hope another network picks it up. I refuse to watch another hour of GMA. They already have 2 hours and don’t need 3. Bring back the Chew and get rid of The View!

Can’t believe they are canceling this show. It became so much better without the precence of Batali. The commraderie is wonderful. The cooking is inspiring and the “people” stories are interesting. I have never met anyone who did not enjoy it.
Shame on ABC…won’t be watching another biased hour of GMA!

I am very very sad to see this show come to an end. I looked forward to watching this show every day. I wish that another network would pick up this show. The dynamic with these three is amazingly awesome.

My family and I are heartbroken to lose The Chew. It is the best daytime show on television and is one of the few uplifting, fun, joyful, entertaining and educational shows being broadcast today. The Chew hosts and, in fact, the entire behind the scenes crew, are like family – someone has to pick up this show.

We are very sad. The Chew has been a ray of sunshine to look forward to every day! We are very upset with ABC. We cannot understand how they could cancel such an enjoyable fun and informative show. Shame on you ABC!!!

This is a sad day. ABC you got this so wrong!! We don’t need GMA to be extended another hour. You tried this before and it didn’t work. Why would you take a show that is successful and award winning away? Please reconsider!

I am beyond sad to see this great show ending. We don’t need another news show that is mostly a downer, we need uplifting shows such as The Chew to entertain us and give us a chuckle or two. I’ve watched the show since it’s inception and have become very fond of Karla, Michael and Clinton, as if they were my family. God Bless them!

Happy to hear this show is canceled. Not a good show in the least. Now all these broadcasting companies need to do is get rid of the other talk shows and all the reality series and finally the soaps. Then TV will be good again.

And what would you replace them with? This show was totally entertainment without the gossip and drama of other talk shows. Plus I learned a lot of tips and tricks from them. I guess if you didn’t like them you must have changed the channel and watched something else. So that could be your solution instead of adding all that are affiliated with The Chew to the unemployment line. Just an opinion that is different than yours. 😉

Michelle
Reply to  NANCY A HUMBACH

Excellent program! Don’t have a chance to watch daily but watch whenever I can!

This Show was great & loved by many. Only taken off the air dur to scandal of previous part time host. That is so very sad!! I’m hoping another Network will pick this show up due to all the out pour from the people who loved this show! It wasn’t just cooking. It’s was funny & entertaining. The last three hosts just meshed together. If persons weren’t home to watch they DVR’d it to watch it later. No other show had that effect on so many!!

I love this show, I wish it didn’t need to be cancelled. Cancel some of the trashy talk shows instead.

Great entertaining show hopefully another network will pick it up.

Very enjoyable show. I am sad to see it cancelled. Another addition of GMA is uneventful as a replacement. Isn’t there enough “news” programs on these days? Why anyone thinks we need it is not current. That time slot is now lost on me and many of my friends. So sad to lose the Chew!

I am dismayed at the end of the show. I will miss the hosts and hope they return in other series!