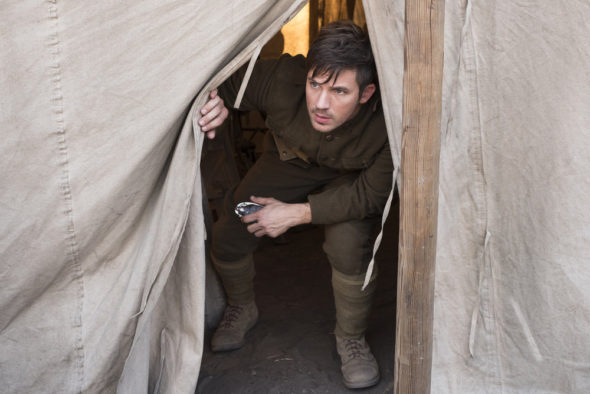 Is the team out of time? Has the Timeless TV show been cancelled or renewed for a third season on NBC? The television vulture is watching all the latest cancellation and renewal news, so this page is the place to track the status of Timeless, season three. Bookmark it, or subscribe for the latest updates. Remember, the television vulture is watching your shows. Are you?

An NBC action adventure drama, Timeless stars Abigail Spencer, Matt Lanter, Malcolm Barrett, Goran Višnjić, Paterson Joseph, Sakina Jaffrey, and Claudia Doumit. Season two picks up right after the events of last season and follows Rufus (Barrett), Wyatt (Lanter), and Lucy (Spencer) on their quest to prevent the destruction of our world as we know it. This season they’ll find an unlikely ally in their mission to destroy Rittenhouse, a deadly organization Lucy’s family has been a part of, for centuries. As they try not to change the past, they will visit 1692, 1917, 1941, 1981 and more, and encounter Marie Curie, Hedy Lamarr, William Randolph Hearst, and other influential historical figures.

The second season of Timeless averaged a 0.61 rating in the 18-49 demographic and 2.64 million viewers. Compared to season one, that’s down by 45% and 43%, respectively. Find out how Timeless stacks up against other NBC TV shows.

Will NBC cancel or renew Timeless for season three? It’s in a tougher timeslot and the ratings have really suffered. I suspect that Timeless will be cancelled and won’t return for a third season unless there’s some reason that makes this show very cheap to produce. Season two benefited from tax incentives but I don’t think season three would have the same break. For now, I’ll update this page with breaking developments. Subscribe for free Timeless cancellation or renewal alerts.

6/22/2018 Status Update: Timeless has been cancelled by NBC. While there will be no season three, there is some hope for fans. Details here.

5/9/2018 Status Update: Sony and NBC are in negotiations for a third season of Timeless. Details here.

What do you think? Did you hope Timeless would be renewed for a season three? How do you feel now that NBC has cancelled this TV show? Would you watch a movie wrap-up?

Loved the show I really wished they didn’t cancel it! Such a pity

Loved this show! Watched with my family and had something for all of us. Touched on historical events which I would even relate to when studying with my grade school kids

The show and the plot is great…….. the ending of the two hr series “isn’t the end”! No show leaves anything open like that and not have “future plans” no punt intended.

I really loved this show – right up to season 2 when it became a rallying call for SJW’s. Don’t get me wrong here – the women/minority stories were well done and need to be told – but when that is ALL you do, you tend to lose people. Even the finale – when her student said “I thought this was American History but all we covered were women.” And the reply was, “Maybe next semester.” All I could think of was – yes, but there will be no next semester because of that nonsense. It is indeed a shame… Read more »

Please don’t cancel this show … I love it

OHHHH LORD I LOVED THIS SHOW , WHENEVER SOMETHING GREAT COMES ON THEY CANCEL IT AND LEAVE CRAP FOR US TO WATCH, IM HEARTBROKEN , WOULD OF LOVED SEASON 3 I NEVER ISSED AN EPISODE IN 2 YEARSMM

Only half of the mission is complete. First we #SaveRufus in the two part holiday event, then we #SaveTimeless! One step at a time. As one of the Sony co-presidents recently stated on Twitter: “We’re not done yet.” Find all the information about the campaign here: http://www.savetimeless.com.

I am completely heartbroken for no season 3 of Timeless I was just thinking about it a day ago looking forward to the next season concluding going after one of their co-worker who’s dead got to go back and change time it’s a TV series it’s not real life we can’t do that in real life, I love this show and the cast I will definitely watch the movie. somebody pick it up and continue on

I hate when they get you hooked on a good show just to cancel it on you! Meanwhile they still have some really stupid shows on the air still! This is why I’m not watching NBC NO MORE!!!…

If your are going to cancel Timeless season three, at least do a two or three night mini series to tie up all the loose ends.

I LOVE Timeless! They can’t leave us hanging! We want Rufus back!