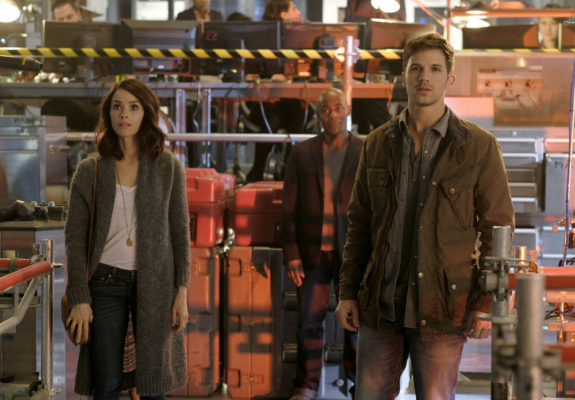 The first season of Timeless just ended last night, but what about season two? Recently, co-creator Shawn Ryan spoke with Deadline about plans for the future of the NBC TV series.

In the interview, Ryan revealed the season one cliffhanger is meant to set up season two:

We had thought for awhile about what the best way was to give some closure for Season 1 while also setting us up for a new dynamic in Season 2. We wanted to bring Garcia Flynn’s journey to some kind of end, though I’m sure we’ll see more of him going forward. So while many people might see our Season 1 conclusion as a cliffhanger, we see it as a wrap-up of Season 1 and a launch point for Season 2.”

Later, he mentioned that he and co-creator Eric Kripke are pitching season two to NBC in April:

We are working on our overall plan for Season 2 right now and we’ll pitch it to NBC in April, so I’m reluctant to get too much into it because we’ll want to take a deep breath and evaluate the whole season before we commit to what we want to do in Season 2. What I can say is the current plan involves our heroes traveling to the past to stop history from being perverted and changed too much.”

As of now, NBC has not yet announced whether Timeless will be renewed or not. Currently, the series is part of an ongoing lawsuit and ratings have been on the decline since the series premiered in October.

What do you think? Are you a fan of Timeless? Do you want a second season?

Love the interaction with history. You need to have another season. Stop all the reality TV and keep good shows going.

Please renew Timeless for Season 2. My whole family watches, and the historical facts in the story add to the storyline.

Love the show. Keep it going!

Omg! We love this show! Reminded and refreshed is on our history, what a great way to do this. Definitely make season 2, as I know it will have so much in store!

Many shows over the years have offered fans a craving for a continuation of an enjoyable and well crafted storyline such as Timeless only to be disappointed by a cancellation.
After awhile people begin to lose faith in seeing and committing their time to a new series with real promise!

Love this show! If we can’t watch it live, we ALWAYS record it so we can watch it later! Please renew for another season!

Yes, we enjoy timeless. It is very entertaining, please continue with season 2

The Season Finale for Timeless was such a cliffhanger! There are so many avenues to pursue for Season Two! Don’t cancel this show….Love it!

The Season Finale for Timeless was such a cliffhanger….you have to have a Season Two….. there are so many avenues to pursue…….Don’t cancel it!

Please NBC renew this I have to have an ending all you did was give us more questions. Please I beg of you to renew Timeless, thank you.

Renew Timeless! Best show on TV! Drama, romance, action, and accurate history. What more could any viewer ask for?

Love it! Please bring it back.

Definitely bring this show back!! It’s different than anything else on tv and I love it.

I became addicted from the first episode of the show “Timeless.” I feel that I’ve been till this season one finale episode each week has built upon the previous weeks suspense and history. I am a fan of history and so I’ve really enjoyed where they have touched in the background of each major point in history. The season finale though gave some closure but so much potential for a second season, a true point in time where you could see both Lucy and Garcia working together– – Both in a point of betrayal. Please keep the series going and… Read more »

Timeless is one of my favorite shows that I watch! I will be so disappointed if it’s cancellee!