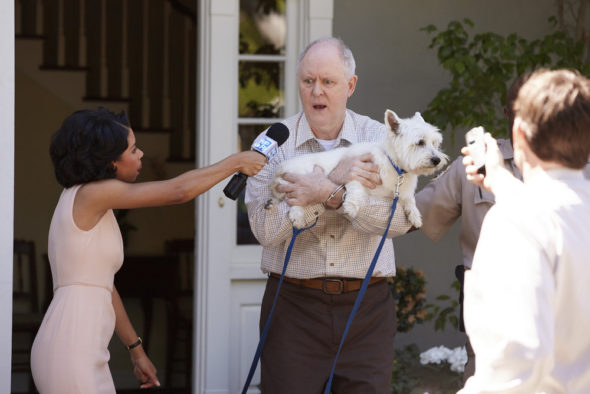 What’s the verdict? Has the Trial & Error TV show been cancelled or renewed for a second season on NBC? The television vulture is watching all the latest cancellation and renewal news, so this page is the place to track the status of Trial & Error season two. Bookmark it, or subscribe for the latest updates. Remember, the television vulture is watching your shows. Are you?

The first season of Trial & Error  averaged a 0.92 rating in the 18-49 demographic and 3.86 million viewers. Find out how Trial & Error stacks up against other NBC TV shows.

NBC has had mixed results with its freshman comedies during the 2016-17 television season. Although a cancellation seems likely for Powerless, The Good Place did well enough to earn a second season. Which path will Trial & Error ultimately follow? It premiered to mediocre ratings and the numbers have been falling lower and lower. I suspect it will be cancelled, but the decision will ultimately come down to money.   Subscribe for free updates on Trial & Error cancellation or renewal news.

What do you think? Are you glad that NBC has renewed Trial & Error for a second season? How many seasons do you think this TV series will run?

BEST SHOW EVER!!!! As long as they add John Lithgow to the team of investigators!!! I’ve never laughed so hard at any other show!

Love this show!!!! Reminds me of The Office and Parks and Recreation!!! Please renew!!!

Love This Show, even more so since reading it is based on a true crime case of Michael Peterson.
So funny, love sherry and john…
Waiting for season 2

Brilliant acting and constant punchlines! John lithgow and sherri shepard are stellar! Bring it back!

Loved this show. A clever bit of fun. I would definitely watch a second season.

I absolutely love this show. It makes me laugh out loud every show. Just hilarious. Can’t wait for next season!!!

We LOVE it!! It’s hilarious!

Hilarious. It even took me a few episodes but then I realized its smart and quirky and easily one of the funniest shows NBC has had since The Office.

Absolutely bring it back. Very funny, well-written, quirky characters. One of the funniest shows on tv.

A little concerned NBC may not pick this one up for a second season. This is the sort of show that could get its legs once it made its way to Netflix. If you’re interested in seeing a second season, maybe search for ‘Netflix title request’ and suggest they acquire Trial and Error; it takes 30 seconds and may help get a second season.

Trial & Error is the funniest show currently on network TV! Parks & Rec and The Office both took a little while to get a strong following. Trial & Error could be a huge hit for NBC if they give it the chance!

I absolutely love Trial an Error. It is different from any other show on TV. I laugh at every episode. The characters are quirky and I love every one of them. I hope they renew for a second season.

Trial and error is a breath of fresh air. We need funny shows on tv. We have to many cop and med shows.. renew it.