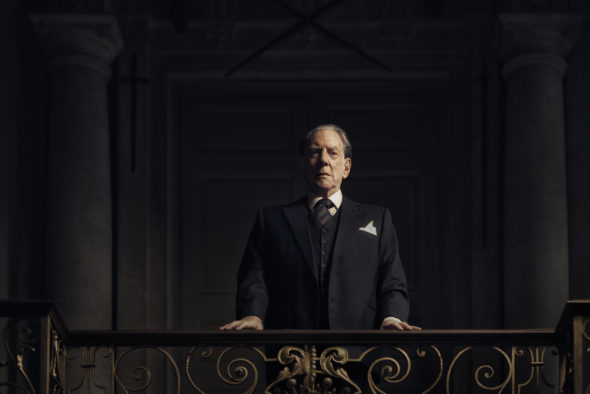 Money can’t buy you love, but it is at the root of TV cancellations and renewals. Has the Trust TV show been cancelled or renewed for a second season on FX? The television vulture is watching all the latest cancellation and renewal news, so this page is the place to track the status of Trust, season two. Bookmark it, or subscribe for the latest updates. Remember, the television vulture is watching your shows. Are you?

An FX anthology drama centering on the Getty Oil family dynasty, Trust stars Donald Sutherland as J. Paul Getty Sr., Michale Esper as J. Paul Getty Jr., Harris Dickinson as John Paul Getty III, Hilary Swank as Gail Getty, and Brendan Fraser as James Fletcher Chace. The story kicks off in 1973, in Rome, when the Italian mafia kidnaps young heir John Paul Getty III. Due to their hostage’s pedigree, the kidnappers expect a handsome ransom, but they never anticipated how this family’s issues would complicate their plot. While grandfather J. Paul Getty is ensconced in the English countryside, and the boy’s father, J. Paul Getty Jr., is lost in a London fog of his own making, John Paul’s mother, Gail, is left to negotiate with her son’s abductors, and she’s flat broke.

The first season of Trust averaged a 0.15 rating in the 18-49 demographic and 587,000 viewers. Find out how Trust stacks up against the other FX TV shows.

Will FX cancel or renew Trust for season two? Though the ratings are quite low, I think it will score a season two renewal. FX certainly cancels some shows after one season. Take The Bastard Executioner, for example. Usually, though it has some patience and gives its series time to take root.

Now, unlike the American Horror Story, American Crime Story, and Feud anthologies, future potential seasons of Trust will continue to focus on the Getty family, so it won’t make a completely clean break, between seasons. That said, its subjects have a long, storied history, which will provide many opportunities starting anew, if and when a season fails to resonate with the audience. Since this is all just speculation, for now, I’ll keep an eye on the Nielsens and update this page with breaking developments. Subscribe for free Trust cancellation or renewal alerts.

Update: FX Has not renewed the Trust TV show for a second season.

What do you think? Were you hoping that the Trust TV show would be renewed for season two?

I hope it renews. I’m glad to learn about the Getty’s finally!!! I’m loving watching this.

Please renew this show. My bd and I really enjoyed it.

I love “Trust” – all the actors, directors, writers. and everyone who contributed to the making of this series are first-rate! My personal favorite is Luca Marinelli as the character Primo – LM was brilliant!

A wonderful show depicting the Getty family. I have enjoyed it immensely! All actors are great. Learning about a wealthy unhappy family and how it works. Please renew!!

Love This Series because Donald Sutherland is so damn good as Paul Getty, so is the boy who plays his grandson, so is the actor who plays the senior Getty’s go-between ….the guy with the big hat.

Idon’t know all the complaining. I DVR it and watch on my time and FF the ads.

What a pain – just to watch the show! I’ve tried to record this on my DVR but it NEVER records properly. I watched the first show, set it for DVR then all I see is Episode 4? I tried to watch ep’s 2 and 3 but you FORCE me to watch commercials. It’s like FX is making me watch it online using On-demand. I’m f-o-r-c-e-d to watch the commercials. Sorry FX, not going to do it. No wonder nobody is watching it, you are FAR too restrictive. Force your commercials somewhere else – I will never watch an On-demand… Read more »