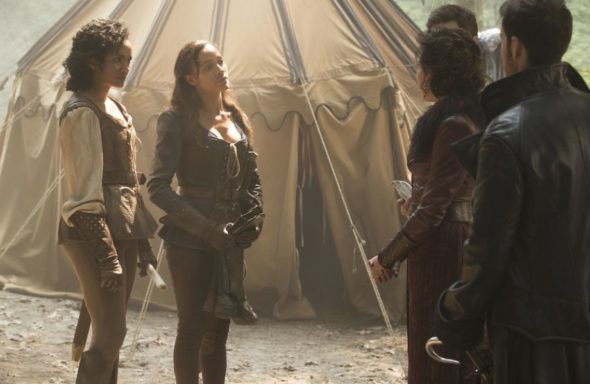 Once Upon a Time has made two additions to its cast. Both Tiera Skovbye and Nathan Parsons will appear on the series in upcoming episodes.

Tiera Skovbye, from Riverdale, will appear on the ABC series as “Robin, Zelena’s grown-up daughter via Robin Hood” per a TV Line report. The report revealed more about this addition:

“Skovbye’s character is described as a strong-willed good girl turned rebel who is struggling to define her identity. As the daughter of powerful parents, she can never seem to escape their shadows, which drives her crazy. Tired of towing the line, Robin is ready to break out into the world and find her own adventure.”

As for Nathan Parsons, last season on The Originals, Entertainment Weekly revealed more about his role:

“Parsons will play Nick, a confident and charismatic slacker-turned-successful-lawyer. He’s polished, but not stuffy or smarmy. A natural guy’s guy, Nick has an instant likability and always says the right thing. Rumor has it he’ll be playing a potential love interest for one of our cast.”

Are you liking this season of Once Upon a Time? Tell us what you think.

I also expect this die in its Friday night slot. I’m not disliking the new story twist but I have a hard time getting to like the new characters. It’s almost confusing trying to connect the new characters to their story book character & keep all the lines of who is who & how they intersect straight. Maybe I’ve gotten to old to care enough about this show.

Do Not like this season
This the original cast
Bring them back!! Please!

I still like it and tape it every week..

“Once Upon a Time” has been done for a long time. ABC gave it the Friday death slot, so I don’t expect it to be renewed.