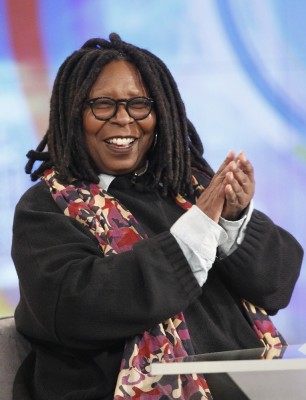 Whoopi is back. Entertainment Weekly reports Whoopi Goldberg is returning to The View for the 2016-17 season.

Earlier, we reported new co-host Michelle Collins was leaving the series after one season. Goldberg has been a co-host on the morning talk show since 2007.

Ok NOW it's official, I have re-upped for 1 year returning to @TheView 4 the 2016/2017 season. Will continue 2 annoy some, delight others

What do you think? Do you watch The View? Are you glad Whoopi’s returning?

Please cancel The View. We’ve had enough of it. I’ve stopped watching and so have a lot of my friends. No one cares about their opinions. They won’t even let their guests speak if they have a different opinion. I’m surprised ABC keeps it on. That’s probably the reason ABC’s ratings are down.

I think it’s the most annoying show on the air.
Whoopi didn’t leave the U.S. as promised.
Please cancel this stupid show.

I stopped watching last year. I found myself getting mad at the way they bullied guests, as well as cohosts, who didn’t agree with there thoughts or opinions. Cancel it, it’s time has come to an end…

This show is a poor example of entertainment. It certainly isn’t considered “news” either. The entire cast is so left wing and biased that it’s embarrassing. The bickering and back and fourth, slamming and overly judgmental “cast” is outrageous. When I see it come on, I immediately get the grotesque feeling to vomit and change the channel. Those women should be ashamed of their hatred filled selves. Also, Ms. Goldberg claimed she would leave America if Mr Trump won the presidential election; well he DID, so go. Please allow me to pack your liberal bags ma’am. Stick to sister act!… Read more »

No I do not watch the view because it has become to political based on opinion. I loved the view at 1st but no more. I did watch after the election & was upset that whoopi said, “that is why black people don’t like to talk to white people” & mentioned how a politician said “20 years ago he (OBAMA) would have been parking my car but refused to say the name of the politician. I just happened to know it was Bill Clinton who said those words but it shows how she is part of the media prob. Report… Read more »

I hope the view does return for 2017 I watch this show for what’s going on with the news and social media and a lot of the way these ladies are thinking or viewing situation is the way I feel as well as a lot of people that I know or work with. Sure they have had some people on the show that I don’t agree with or even like, but being american means freedom of speech even if you don’t agree and everyone is entitled to there own opinions

I agree with others that the show should be cancelled. Whoopi Goldberg and Joy Behar are the most disgusting people I have ever seen. I do not watch it any more. When Barbara Walters was there it was not this bad but since she is gone the new name should be “Let’s bash Donald Trump”. This is old and those two women are the worse I have ever seen. I know you will not cancel the show but someone needs to get ahold of these two idiots and let them know there are other topics. I did not vote for… Read more »

I do not watch this horrible show. It should be cancelled. And how can Whoopi be returning if she was leaving the country if Trump won? She should have been long gone. Pack your bags and LEAVE!! And take Jane Fonda with you!

I think The View should be cancelled! I quit watching a long time ago because of the leftist remarks made all the time. There should be an even amount of Liberals and Conservatives on a show discussing current events.

Cat
i kept hearing Whoopi say she was leaving the country if Trump won guess what he did. i refuse to watch a program that has a person that lies on it!

The show sucks!! Please put something entertaining on…Joy and Whooping are so obnoxious, it’s like watching jerry springer but worse.,

No big deal for me….Can’t stand to watch the cackling hens…turn that show off a long time ago….lol

Yes the show is very boring and negative, as soon as it comes on I turn it off. Whoopie needs a slap across her head to wake her up and quit making us feel sorry about the past. This is the future and we are in the positive and not the negative like she is. She needs to open a door of a church because she doesn’t know what love and forgiveness, but this is how she makes money. She survives on the negativity of those that refuse to move up the social ladder.

No I do not watch the view. I think it should have been cancelled years ago. if they want to get better reviews and it will not be from me they need to truly listen to what is said before speaking.

I think this show needs to be cancelled Whoopie and Joy are loud mouths and are disrespectful to their guest. They talk over the top of them and Whoopie looks mad all the time and is an angry person especially when it comes to politics because she is a Obama and Hillary fan I don’t know what happen to her because she wasn’t like that when Barbara Walters was ahead of it. Could it be menopause?

The View should have been cancelled long ago for false advertising. They pretend to be in any way a “news” show, when in truth it is a very hypocritical, biggoted pack of women who just use air time to be rude as all get out, not to mention yelling over and trying to stifle, any guest who doesn’t agree with them. Unfortunately, there are too many people who are just too ignorant or lazy to check the facts, and realize how off base, and out of line, these women are. AS a woman, I consider the ones like Behar and… Read more »