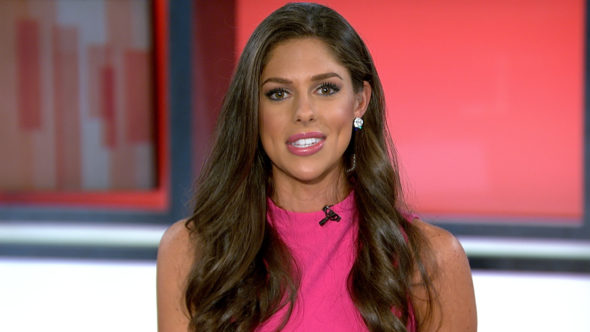 Abby Huntsman is coming to The View. Variety reports the FOX News correspondent has joined season 22 of the ABC TV show.

Huntsman will be replacing Sara Haines and Paula Faris on the upcoming season of The View. The Fox & Friends co-host is the daughter of Jon Huntsman, the U.S. Ambassador to Russia and has previously worked for MSNBC and CNN.

What do you think? Do you watch The View? Are you excited for the new season?

Have watched The view since inception . Stuck with it over the years ,don’t mind Megan , tho she can be aggressive , but Abby Huntsman is terrible and I flinch whenever she speaks . She comes off as snotty and ignorant. Abrasive, and for such a young woman , reeks of such unhappiness and downright anger, its disturbing. Maybe it’s nerves, but not fun to watch. I don’t care where she came from, she is ruining the ‘viewing’ experience for me. If she stays, I think you may get cancelled -come back Sarah!

Ms. Huntsman is not only artificial, she is an obvious Trump supporter – neither of which fit in with The View. Megan McCain is also Republican but she fits in well and stands up for what she believes in and I respect that even though I don’t agree with much of what she has to say. Please let Ms. Huntsman go back to Fox. She is perfect for them. I watch The View every day and have for years and want to continue to do so.

Abbey Huntsman, Really? Putin has invaded the White House and now “The View”. I don’t know how much I can stomach. You don’t become US/Russian Ambassador with-out strong ties to Putin. Leave it to “The View” to give Putin a spot at the table.

so far NOT IMPRESSED! Yes she needs a chance to lose her reporter approach. She needs to humble herself and not so abrasive and let us get to know her. If no changes come, I am not a fan.

The view does not need a F, O, X, thug. With the F, O, X– thug their will be a lot of yelling and screaming with bulging eyes. just saying

The View should continue with the libral commentators as it as been.i don’t know why it has been in re runs this month of August. I live in a very red state and this is a rare moment I get to hear voices of reason. I’manxiously looking for it’s return, it’s always been the top of my day.

voices of reason?….hayou want liberal views try CNN or MSNBC all we hear is from the libs, Republicans need to be heard too especially women

The show needed balance, Megan has to shout to be heard, now we’ll see if the this line up will shake things up, I will give it a chance

We love Abby and hope see can survive the Trump haters

I will probably stop recording the View. Always talking over each other. Megan is a spoiled child and keeps telling how she is a republican and knows all about everything Clinging to her fathers shirt tails. With Sara gone control of the show is gone. Maybe Whoopi can try to get control again. Will watch 1st couple episodes to see the direction the will run. If it gets worse it will be Kathy lee and Honda.

Am done with this mess. A good show has literally been ruined. If I wanted to watch Fox “News” I wouldn’t be watching ABC. Whoever’s running the show is making a huge mistake – first 3-year-old Meghan throwing tantrums daily, and now another beneficiary of nepotism to be her BFF. If Joy, Sunny, and Whoopi have any sense, they’ll flee before this ship sinks for good.

Why is this show being turned into Fox News. It’s bad enough that Meghan is there, now there will be two with rediculous views. Uggh. Guess will skip and jump to Sara and Michael at 1 pm

The show is getting old. Bring back the chew.

Awful show. Needs cancelled ASAP. Concept is good but crew is terrible. Get it off the air!