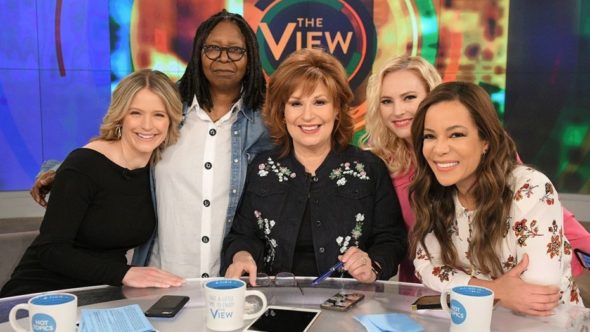 Big changes are coming to The View. Deadline reports both Sara Haines and Paula Faris are leaving the ABC TV show.

Faris, who is also leaving her stint as weekend anchor at Good Morning America, has been a panelist on The View since 2015. Meanwhile, Haines has been a castmember on the daytime talk show since 2016. Starting September 10th, she’ll be the new co-host of GMA Day alongside Michael Strahan.

So who’s taking the places of Faris and Haines on The View? According to Deadline, Fox & Friends‘ Abby Huntsman and CNN contributor Ana Navarro are possibly being considered to replace the two on the ABC talk show.

What do you think? Do you watch The View? Who would you like to see as the new co-hosts?

I am always watching The View. It’s my favorite show bar none — especially when Ana Navarro is on. I hope she becomes a permanent every day host. She’s funny, smart and has an inviting aura about her.

Worst show by far..privileged women telling common folk how to live their lives…horrible. I love the view with Sara & Paula. In fact I often repeat stories to my hubby that a funny and get a good laugh out of them. Paula is so funny I love her humor & Sarah is the voice of reason excellent show.

Haven’t watched The View since it’s turned into nothing but political bashing. It used to be entertaining. Best thing Paula and Sarah could do for their careers is to distance themselves from The View. Best of luck to the both of them.

Well, I am sad to see Sarah go – I will miss at the table. Paula was very rarely on but I liked her. Can’t wait to see who will be next at the HOT TOPICS table and all the other great discussions

No I do not watch the view. It is the worst show on TV. Those old Bettie’s views are garbage. How do they get away with the things they say? I don’t watch them but they pop up in the news and face book on their unexceptionable behaver on their show. Cancel the show and put something worth watching. By the way I’m so excited Last Man is coming back . Tim is very entertaining. To bad you throw him away. Lol

I loved Sarah! I’m sorry she’s leaving. Paula’s great too, but she hasn’t been on that much anyway so I won’t really miss her. YES, I would be happy with Ana Navarro. And I would also love it if Jedediah Bila came back. I like hearing more than one side of every story, and more than one political view. No matter my politics (which lean towards Whoopi and Joy), I want to hear everyone else’s opinions as well. And I adore Meghan McCain.

Ick, an alumni of Fox and Friends??? Stop the Fauxification of the U.S.! No to Huntsman, in my opinion one privileged daughter of a politician (McCain) is more than enough!

Why hasn’t this garbage show been cancelled yet????

Yes cancel the view Roseanne back

Anna Navarro would be a wonderful addition to the show. She is well liked, educated and
worth listening to.

I love the View! The show today spent way to much time worrying about nominees for 2024! My Lord Trump is gone but yet you give him more free advertising! Megan rattles on like shes lost and trying to fine her way! She talks so fast cant understand what shes saying at all. I love Sonny, Sara, Anna, and Whoopie! Joy gets annoying ! Sorry , I do watch the show all the time, and those are my true feelings.

I’ll miss Sara on The View, she was fun.
I’d like to see Ana Navarro as a co-host.

would love to see Ana Navarro on more often