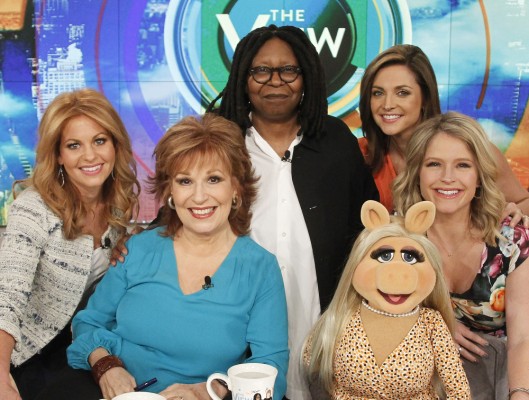 Is Whoopi Goldberg leaving The View? According to The Wrap, the co-host may be departing from the ABC talk show.

Goldberg began co-hosting The View in 2007.

Apparently, Goldberg has told those close to her that she will be leaving when her contract ends at the close of the current season. However, nothing official has been announced, and ABC has already renewed the chat show for season 20.

In that announcement, executive producer Candi Carter singled out Goldberg as an essential part of The View‘s panel:

It’s an honor to be part of the extraordinary legacy built by Barbara Walters, the exceptional, funny and smart women at the table led by Whoopi Goldberg, and a terrific team behind the scenes. Every day is a thrill.”

What do you think? Do you watch The View? Do you think Whoopi should leave or stay?

I do not want Whoopi to leave she keeps everyone in line including Megan McCain. I think Megan should leave all she talks about is John McCain. I have nothing but respect for John McCain. We all know that she really has not accomplished anything important in her life. I think Ana Navarro should replace Megan. I love this show!

The show would definitely not be the same without Whoopi. I had a hard time watching when she was out with her recent illness. I’m on pins and needles each year because the personalities make the show. I love all the current ladies, including Anna when she subs. I have cut Meghan a lot of slack for her loss this past year. I think everyone else should, as well.

Whoopi. Please stay the show will not be worth watching without you. Please please stay. I love what you say because I feel the same way you do YOUR the best.

Dear Ms. Goldberg, please don’t leave. But I can understand if it’s not enough or you’re unable to move forward to other dreams or whatever your reason is to leave, I’ll still follow you in your career. I will miss you.

I love this show. Ms. Goldberg is smart, whitty and mostly has common sense, which is hard to find these days!! I guess the only thing I get upset about is that Megan keeps saying, “I am John McCain ‘s daughter, “. then grow up and act like him with respect for others. Never heard him raise his voice and never knew him to “Not” listen nor let someone have their view. He might not have agreed, but he was always open to listening. Take the hint Megan!!! Ms. Goldberg, whatever decision you make for yourself, I’m behind you percent!!!… Read more »