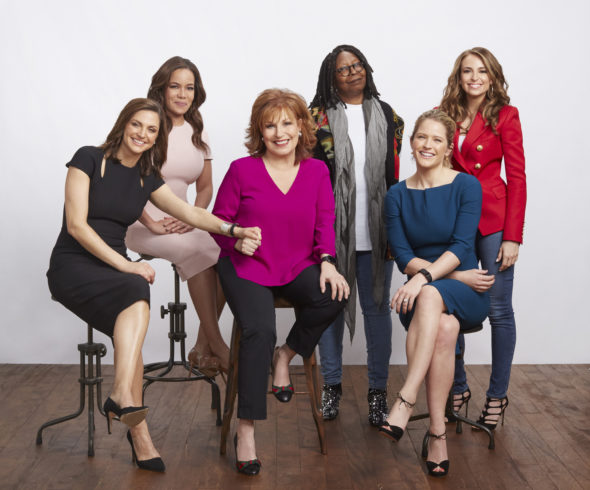 Here’s another co-host we’ll have to catch in the rearview mirror. Jedediah Bila announced on air that today is her last day co-hosting The View. It had seemed with this most recent lineup that the ABC daytime talk show had ended its game of co-host musical chairs and settled on a panel that also includes moderator Whoopi Goldberg, Joy Behar, Sunny Hostin, and Sara Haines, as well as part-time co-host, Paula Faris. No real reason for Bila’s departure was given and the mood on the set made it seem as though this was both sudden and rather bittersweet for Bila.

In particular, Bila’s departure announcement seemed oddly timed, seeing as it is just 10 episodes into the 21st season on ABC. It also felt out of step with an otherwise fluffy installment of The View. The hour opened with a tiara and candy-laden celebration of Haines’ 40th birthday, which included a brief appearance by the expectant co-host’s husband and adorable young son. Guests today also included former View co-host Candace Cameron Bure, as well as her Full House and Fuller House co-stars Bob Saget, Jodie Sweetin, Andrea Barber, and Dave Coulier. Meanwhile, CNN reports that Meghan McCain, who just left the Fox News Network, is in talks with ABC to board The View.

The announcement filled The View‘s entire second segment and began when Goldberg told Bila she had the floor. Visibly and audibly choked up, Bila said, in part:

So, this is my last day at The View. […] I want to thank these ladies, What do you don’t know about us is that — these ladies — we’re really friends. Sunny’s texts, I mean… Sara… Whoopi, you’re my inspiration. Joy, you — when I need comedic relief, this is where I go, so we’re going to be friends, no matter what.

But I want to thank you, because I’m a little eccentric and you put up with me, and this has been just an amazing journey, and I appreciate all of you. I want to thank the viewers — even the ones that write me the hate tweets. You know, this is what I’m here for. I’m there to shake things up in life and in television. And I have a book that I’m writing with Harper-Collins, right now…


.@JedediahBila announces she is leaving @TheView: "This has been just an amazing journey." pic.twitter.com/F2AKWbwJPG

When asked by Hostin, Bila said she hasn’t yet settled on a title yet, but she expects her book will  “shake up the world.” She also said she has many opportunities to consider and map out. As Haines reminded her, Bila is also preparing for her wedding to fiancé Jeremy Scher.

When Bila finished speaking, Hostin and Haines both hugged her, and Goldberg slid what appeared to be a tin of candy to her, across the table. Meanwhile Behar and Bila celebrated their connection as Italian-Americans.

Hostin added, “We rarely agree on anything […] but I am honored to call you friend.” That exchange also ended in an embrace.

A columnist, commentator, and self-proclaimed Libertarian, Bila (along with part-timer Faris) offered one of the few consistently conservative voices to this ongoing conversation. Behar noted the importance of the show including diverse points of view and recalled her famous disagreements with Elisabeth Hasselbeck, as well as their off-screen camaraderie.

Haines added that Bila is skilled at clearly breaking down issues and said that she’s learned much from her departing co-host.

At the close of the segment, Bila added, “And thank you, Whoopi. Whoopi — you are — listen, I was a fan of yours long before I sat at this table and I’ll be a fan forever, but you gave me a voice. Even when you didn’t agree with me, you let me say my piece, and that means more to me than anything, so thank you.”

Let’s hope that comment was in reference to whatever Goldberg slid across the table, because otherwise, we’ve got nothing.

Bila remained onscreen during Cameron Bure’s introduction and interview during the third segment, which aired mid-show. By the time Saget, Coulier, Sweetin, and Barber came to the table, Bila was offscreen, as was Goldberg. This is less unusual as it sounds. Frequently, one or more co-hosts will sit out celebrity interviews, particularly when there is a large group.

The hour closed with Haines flying solo, still wearing her birthday tiara and sash, as she conducted the show’s “View Your Deal” segment with style expert Gretta Monahan.

Meanwhile, Page Six reports on the backstage scoop on Bila leaving The View:

Hilary Estey McLoughlin, the executive in charge of the show, as well as its two executive producers, Candi Carter and Brian Teta, sent a note to “The View” staff Monday morning.

“As some of you heard this morning at our meeting, we have some bittersweet news to share. Jed is leaving our show, and today is her last day. She has new opportunities on the horizon, including her new book,” the internal note, obtained by Page Six, read.

“She’s been a spirited voice at the table over the past year, asking smart questions and challenging us all to think. We want to thank Jed very much for all of her contributions and wish her great success with the next step in her career. She will always be part of ‘The View’ family, and we’ll welcome her back to talk about her new projects. Please join us in thanking Jed for her hard work, her dedication and her voice at the table.”

What do you think? Are you still watching The View TV show on ABC? Did you find Bila’s exit announcement sudden and surprising? Who would you like to see replace her? Sound off, in the comments, then take a little time to enjoy The View.

Please get rid of Meghan McCain. I watch this show daily since it started with Barbara in 1997. Meghan has brought ratings down and nothing but political garbage to the show. There is less variety since she has been on . I like and respect her dad . But she needs to go.

I was very surprised and disappointed that she was leaving. I recognized her comments as trying to get the others to see things from a different perspective. People need to listen to the other side even if they don’t agree. Unfortunately, she ran into the same thing all the others, that don’t agree with the majority, did. I know she would talk to long at times, but they cut her off, sometimes rather rudely, when they didn’t agree. It doesn’t seem like they really want that difference of opinion on the show. I do not believe there was anything wrong… Read more »

This show is a waste of precious time.

Just started watching this year ,Amd love the show. Especially Whoopi and Jedediah. WS so unhappy that she is leaving especalluy if it’s for slo e damned stupid dofferenc

First, for those of you who don’t watch the show, why read the article and leave a comment? Jed spread lies and “alternative facts.” I applaud ABC for having the moral compass to let her go. We need to have someone who can have aposing views without spreading lies and misinformation. I will continue to watch and enjoy the view.

I think The View has stayed too long at the fair!

WON”T miss Jed at all – her machine gun delivery & over-talking/endless talking rubbed me the wrong way. I agree the panel needs a conservative – why did they let Nicole Wallace get away??

i will miss her!The show would lose its effectivness as a discussion forum of topics of interest for people if the hosts all agreed on everything.Ms Bila always spoke her mind and kept true to her beliefs yet had empathy for others and their ideas.

Nope. Don’t watch it. Those women spew nothing but hatred & lies, and also have no clue about the law. She was probably forced out because she is “somewhat” conservative.

If you don’t watch it, why read the article and then leave a comment. Silly

I couldn’t care less! Those women are evil!!

I have no idea who she is, don’t watch anymore.