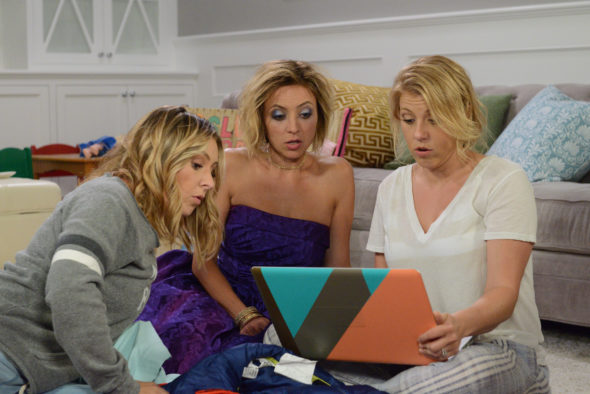 OH SNAP, POP’S ‘90S BABES ARE BACK FOR SECOND SEASON OF “HOLLYWOOD DARLINGS”

LOS ANGELES – Sept. 18, 2017 – Put down your pogs, turn off that Tamagotchi and get a sweet ‘90s fix with an all new season of Pop’s HOLLYWOOD DARLINGS. Renewed for a second season, the television comedy starring Jodie Sweetin (“Full House,” “Fuller House”), Christine Lakin (“Step By Step”) and Beverley Mitchell (“7th Heaven”) will begin production this fall.

HOLLYWOOD DARLINGS follows real-life friends who are bonded by a sisterhood only they can share — former child stars who grew up in the ‘90s limelight. Sweetin, Mitchell and Lakin play exaggerated versions of themselves as they comically improvise and riff on their current Hollywood lives. With the support of one another, this #squadgoals dream team can take on anything when it comes to parenting, marriage, friendship and revived careers in show business.

“HOLLYWOOD DARLINGS re-introduced us as grown-ups – three super fly and super funny women juggling it all and willing to laugh at ourselves,” said Sweetin, Lakin and Mitchell. “Getting to continue this sisterhood on screen is the height of amazing, and we can’t wait for the magic to continue in season two.”

On the next season, Sweetin, a doting mother of two young girls, has recently wrapped production on season three of “Fuller House” and is in production on the upcoming Hallmark movie “Finding Santa”; Mitchell, who is also enjoying #familylife with two kids and hubby (follow along on her blog GrowingUpHollywood), appears on the newest season of “Battle of the Network Stars”; while Lakin, a proud new mom and wife, is deep into filming a role in the drama “I Am That Man,” along with co-hosting Worst Ever Podcast (audioboom).

“Now that Jodie, Beverley and Christine have settled into adulthood, the real fun is just beginning,” said Justin Rosenblatt, EVP, Original Programming. “The new season of HOLLYWOOD DARLINGS will once again connect fans to the faces they grew up loving, turning on its head what they thought they knew about these three women.”

HOLLYWOOD DARLINGS is produced by Main Event Media and All3Media America. The series was created by Jimmy Fox, who serves as executive producer along with Layla Smith and Greg Lipstone.

What do you think? Did you watch the first season of the Hollywood Darlings TV series? Do you plan to tune in for season two on Pop TV? Let us know, below.

Hope it is renewed for season 3