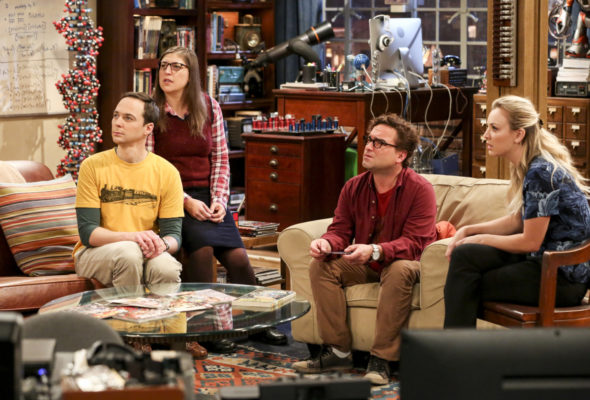 Will it end with a whimper or a bang? Is The Big Bang Theory TV show cancelled or renewed for a 13th season on CBS? The television vulture is watching all the latest TV cancellation and renewal news, so this page is the place to track the status of The Big Bang Theory, season 13. Bookmark it, or subscribe for the latest updates. Remember, the television vulture is watching your shows. Are you?

A CBS sitcom, The Big Bang Theory stars Johnny Galecki, Jim Parsons, Mayim Bialik, Simon Helberg, Melissa Rauch, Kunal Nayyar, and Kaley Cuoco. The story revolves around a group of brilliant scientists who are still somewhat socially inept, despite their progress over the years. The final season kicks off with not only Leonard (Galecki) and Penny (Cuoco), and Howard (Helberg) and Bernadette (Rauch) married, Sheldon (Parsons) and Amy (Bialik) are also now joined in connubial bliss.

The 12th season of The Big Bang Theory averaged a 2.28 rating in the 18-49 demographic and 13.22 million viewers. Compared to season 11, that’s down by 17% and 6%, respectively. Find out how The Big Bang Theory stacks up against the other CBS TV shows.

Don’t spend the season wondering whether CBS will cancel or renew The Big Bang Theory for season 13. They previously announced this would be the comedy’s 12th and final season. Still, I’ll keep an eye on the Nielsens and update this page with breaking developments. Subscribe for free news and The Big Bang Theory cancellation or renewal alerts.

Please bring up the season 13, There is no other great source of entertainment and fun rather than THE BIG BANG THEORY!!

Please add a 13th season love the show sooo much

I love tbbt! Of course if it were up to me, I would continue making more seasons. The 12th season ended so abruptly!. Do Sheldon and Amy win the Nobel ? Does Raj ever gets married!? I mean who ends a show like that? It’s my favorite show and I want it to be continued.

Well, if there was another season it would be about Raj getting married and Penny and Leonard having a baby. It would be hard to strech that for this long.

I will miss Big Bang Theory. It’s been great fun watching these science nerds come into their own. I’d love to see Raj lose his “neediness” and show real strength in these last episodes. They’ve all grown up but they’ve left Raj behind. GREAT group of actors. Won’t be the same without them!

Keep this show on. Everyone loves it. We would truly miss it so much