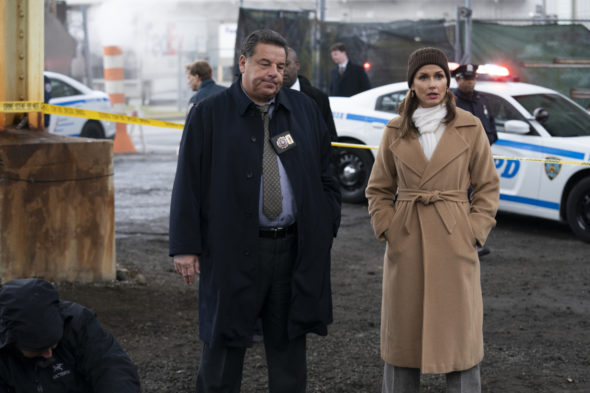 The Blue Bloods season finale aired on CBS last night, but the Reagan family has managed to keep in touch since production on the season ended. The cast reunited for a special Dinner with the Reagans event, and fans will see another reunion on Monday.

During the event, Wade addressed the series returning next season, and if they will handle the new state of the world on-screen. He said the following:

“I don’t think you can run far away from it, it’s something I’ve been talking about with our writers, with (showrunners) Warren Leight from Law & Order: SVU and Glenn Gordon Caron from Bull and with a lot of people, just how do you go back embrace it and yet how not have it drive the show, because at the end of the day we were never sort of making a documentary of life.”

Blue Bloods has not yet been officially renewed for a new season by CBS. Check out the first part of Dinner with the Reagans here.

What do you think? Do you want another season of Blue Bloods?

Absolutely!!! My husband and I look forward to Bluebloods every week!!! It’s an excellent TV drama series.

Absolutely should return. On point with many subjects.

YES!!! Keep it going, LOVE the show and the whole family!

BLUE BLOODS is one of the best shows in the history of television. Please continue BLUE BLOODS.

Please renew Blue Bloods. It wouldn’t be Friday night without it!

My husband and I can’t wait to watch Blue Bloods each week. What a lovely family. Love the Sunday dinners. Please bring it back next season.

Please renew this series. My family and I truly love it.

ABSOLUTELY, let’s have another season or two or three…depending on what the cast wants to do!!! Just make it happen PLEASE!!!

Please renew as this is one of the most down to earth and clean programs we can watch. So please renew!!!