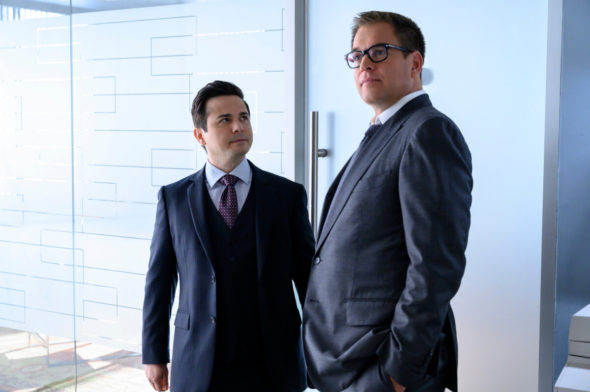 Airing on Monday nights, the fourth season of Bull averaged a 0.63 rating in the 18-49 demographic and 6.35 million viewers. Compared to season three, that’s down by 15% and 5%, respectively.

The fourth season finale aired this week. What tricks does Bull have up his sleeve for season five? We’ll have to wait and see.

What do you think? Do you watch the Bull TV show? Will you watch season five on CBS?

My husband and I love watching Bull. Thank you for renewing our favorite show. Looking forward to watching it.

My husband and I love watching Bull. Thank you, looking forward to watching. P

Jason Bull is the reason I watch TV on Monday evenings. I liked him on NCIS and love him on his own show. Please renew the season every time it is up. Thank you

This is our favorite TV series bar none! The acting is great. The story lines are always interesting and keep you guessing. We love Michael Weatherly, but the entire cast is great. I am so glad Bull is being renewed. I hope the viewership rises so that the series can continue. It really is one of the best series on TV

We really enjoy this show and are so glad it was renewed.

My top show! Court room intrigue, tongue in cheek humor, great cast! Am I glad to set aside 10:00 PM Mondays next Fall!

I enjoy watching the show. It’s a great cast

The TV Show “Bull” is one of the best TV shows on CBS. We watch only two TV Shows – and Bull is our Number One. We pre-record Bull on Monday nights – just in case we can’t watch the Monday nigh show. I have the first three seasons of Bull on DVD and will purchase the 4th Season once it comes out. The actors are so believable – our family favorites are Michael Weatherly and Freddie Rodrgdquez. So happy there will be a Season 5.

Looking forward to Season 5! So glad it was renewed! Mainstay of my loved weekly programming!!

I am so glad Bull has been renewed for another season. I love this show.

One of my favourite shows at the moment. Waiting for season 4 to air in South Africa.

It’s my one of my favoeite shows, I’m happy.

Yay I’m so happy it’s returning I love this show, I am a juror when it comes on too!!! I love all of the crew!!