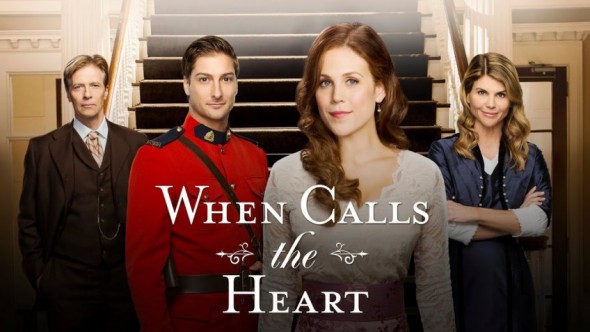 Last year, Hallmark Channel cancelled Cedar Cove after three seasons. Interestingly, the show’s third season ratings were nearly identical to those from season two of When Calls the Heart. Is When Calls the Heart in danger? Will the ratings rise or fall this time around? Cancelled or renewed for season four? Stay tuned.

4/11 update: Hallmark has renewed When Calls the Heart for a fourth season.

For comparisons: The second season of When Calls the Heart averaged a 0.14 rating in the 18-49 demographic with 1.67 million viewers.

What do you think? Do you like the When Calls the Heart TV show on Hallmark? Do you think that the series should be cancelled or renewed for season four?

Please renew when calls the heart! Its my favorite show. If you have to take it off’ at least make the next seasons available on DVD! Please!!!!! Don’t cancel!

Such a great show that the entire family can enjoy. Please don’t be like the other channels. Give the program a chance

Please have a Season 4 of When Calls the Heart! I would be totally depressed if it was cancelled! It is the very best show out there!!

Please renew “When calls the Heart.” It is so refreshing for a show to be on t.v. that everyone in the family can watch together! The story lines and characters are wonderful and it is great to watch the development. Please renew this wonderful show!

Please renew for season 4 . Love story line, actors, setting and the family aspect of the show. Also it is a show the whole family can sit down and enjoy together. Read the books and the show is just as great.

This is one of the best shows on TV in a long time. Way overdue in my opinion. There are very few programs where it’s safe to watch with your kids, grandkids or even your parents! In a world of reality TV this is a refreshing change of pace. It’s full of not only romance, but humor and drama suitable for family viewing. I honestly believe to look at the ratings from 2/21 to be short-sighted. Moving it to Sunday night, against long standing favorites Downton Abbey and The Walking Dead, not too mention a 60th Disney Anniversary Special, it… Read more »

When Calls the Heart is the best program to be shown on TV in the last 25 years. It’s values and faith exceed all expectations that could ever be televised. It has the quality that is lacking in family TV and the moral and ethical values are outstandinig. TV needs this type of programing. It is faith and the following that viewers need especially to the youth of this country. Michael Landon Jr and Brian Bird are the creators of the wonderful series and have dedicated their entire lives to the making of family programing. It was be a great… Read more »

Please renew. It’s such a loving movie, and for the whole family.

I watch When Calls The Heart with my granddaughter and we love it! One of the few shows great for family viewing. Please keep this show on the air.

Please renew When Calls the Heart! This is such a great show and it is one of the few things on tv we can watch as a family with our young children.

Show is Grest as was Cedar Cove – a mistake to cancel either one !

I LOVE When Calls The Heart! I love the story lines, the characters and everything about the show! I hope it continues for many seasons to come!!! #Heartie

Please keep When Calls the Heart. I love it.!