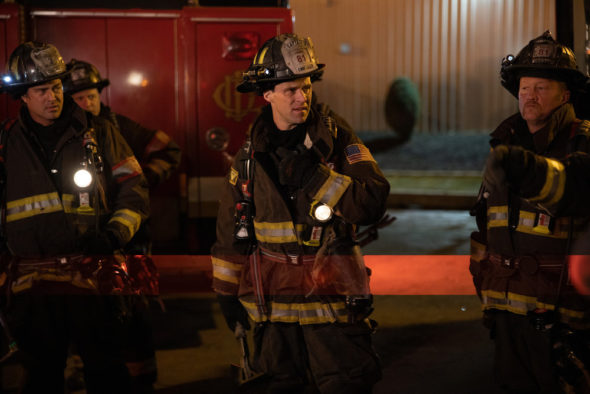 The men and women of Chicago Firehouse 51 are staying on duty  — for the next three years. NBC has announced the Chicago Fire TV show has been renewed for three more seasons — seasons nine, 10, and 11 — which will keep the dramatic series on the air through the 2022-23 broadcast network season.

Today, it was announced that producer Dick Wolf and his Wolf Entertainment company have signed a new five-year deal to remain at Universal Television. The latter is a division of NBCUniversal Content Studios and has been Wolf’s studio home for the past 36 years. As part of the pact, NBC gave three-year renewals to Chicago Fire, Chicago PD (through season 10), Chicago Med (through season eight), and Law & Order: Special Victims Unit (through season 24).

“Dick Wolf has proven time and time again that he makes shows audiences love,” said Paul Telegdy, Chairman, NBC Entertainment. “We are delighted, excited and proud that as part of this epic deal with Wolf Entertainment, NBC’s loyal audience will know that their favorite shows have a certain future for the next three years.”

What do you think? Are you a fan of the Chicago Fire TV series? Do you think this three-season renewal is a good idea?

I absolutely love Chicago Fire. So glad it’s coming back for 3 years. I watch all 3 Chicago programs.

Yes- Love all the Chicago’s!!

The three Chicago shows are great and Fire is my favorite.

Yes im definetly a big fan of Chicago fire, can’t wait for the the next 3 seasons.All i want to know if Dawson maybe going to be a guest character in Chicago fire after she left us devestated in season 6

Love the Chicago series and it should continue. There is so much more to add to the stories

I absolutely love Chicago Fire. I have been watching it from the beginning. I’m sooo glad they have renewed it for another three years. Way to go NBC!

One of the best shows on

Love all rhe chicago series, it’s great news they have all been recommissioned.

One Chicago, renewed for three seasons!
There will be Fire.. Guns… and Hospital Doctors