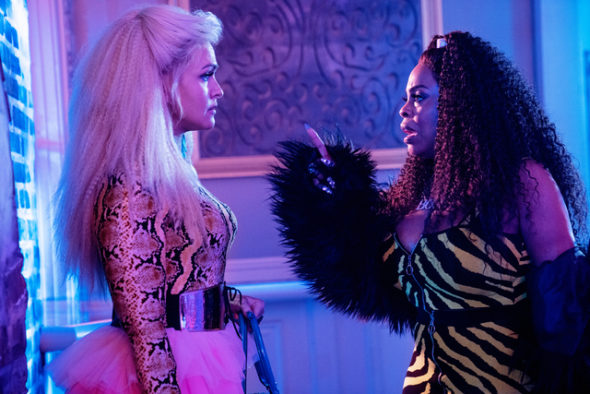 Who will end up on top in the fourth season of the Claws TV show on TNT? As we all know, the Nielsen ratings typically play a big role in determining whether a TV show like Claws is cancelled or renewed for season five (in this case, we know season four is the end). Unfortunately, most of us do not live in Nielsen households. Because many viewers feel frustrated when their viewing habits and opinions aren’t considered, we invite you to rate all of the fourth season episodes of Claws here.

A TNT dark crime dramedy series, the Claws TV show stars Niecy Nash, Carrie Preston, Judy Reyes, Karrueche Tran, Jenn Lyon, Kevin Rankin, and Jason Antoon, with Harold Perrineau and Dean Norris. The story centers on the diverse and dangerous staff of the Nail Artisan of Manatee County salon in South Florida. Desna Simms (Nash), along with her crew of manicurists, rises to power in the crime world to claim her share of cash and respect. It’s the story of hardworking women trying to get by in this economy, set against the surreal, bright, gritty landscape of Florida and the luscious, absurd, and extreme excesses of the crime world.


Note: The fourth season premiere aired on TBS as a special preview on Friday, December 17th.

What do you think? Which season four episodes of the Claws TV series do you rate as wonderful, terrible, or somewhere between? Do you think that Claws should be ending or renewed for a fifth season on TNT? Don’t forget to vote, and share your thoughts, below.