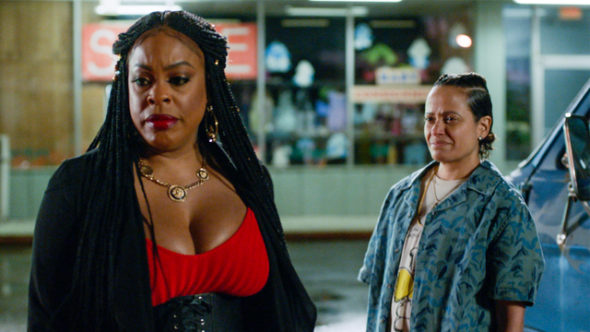 Will Desna and her staff get taken down? Has the Claws TV show been cancelled or renewed for a fifth season on TNT? The television vulture is watching all the latest cancellation and renewal news, so this page is the place to track the status of Claws, season five. Bookmark it, or subscribe for the latest updates. Remember, the television vulture is watching your shows. Are you?

Airing on the TNT cable channel, the Claws TV show stars Niecy Nash, Carrie Preston, Judy Reyes, Karrueche Tran, Jenn Lyon, Kevin Rankin, and Jason Antoon, with Harold Perrineau and Dean Norris. The story centers on the diverse and dangerous staff of the Nail Artisan of Manatee County salon in South Florida. Desna Simms (Nash), along with her crew of manicurists, rises to power in the crime world to claim her share of cash and respect. It’s the story of hardworking women trying to get by in this economy, set against the surreal, bright, gritty landscape of Florida and the luscious, absurd, and extreme excesses of the crime world.

The fourth season of Claws averaged a 0.11 rating in the 18-49 demographic and 437,000 viewers. Compared to season three, that’s down by 60% in the demo and down by 46% in viewership in the live+same day ratings (including DVR playback through 3:00 AM). While these numbers don’t include further delayed or streaming viewing, they are a very good indicator of how a show is performing, especially when compared to others on the same channel. There can be other economic factors involved in a show’s fate, but typically the higher-rated series are renewed and the lower-rated ones are cancelled. Find out how Claws stacks up against other TNT TV shows.

We don’t have to wonder about the future of Claws on TNT. We already know that season four is the end for Desna Simms and her staff.  I’ll update this page with breaking developments. Subscribe for free alerts on Claws cancellation or renewal news.

What do you think? Do you think that the Claws TV show should have been renewed for a fifth season? Are you sorry that this TNT series is ending?

I love this show. I’ve watched every season since it first came on. Seems like everytime I get into a series it’s canceled, I think this will be the last series I’ll ever watch.