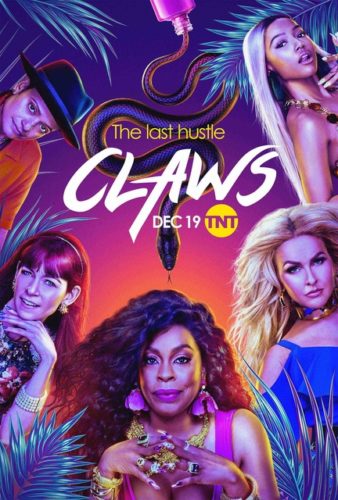 We don’t have to wonder if the Claws TV show will be cancelled by TNT this time around. It’s already been announced that this is the final batch of episodes and there won’t be a fifth season. Will Claws go out with a bang? Stay tuned.

A dark crime dramedy series, the Claws TV show stars Niecy Nash, Carrie Preston, Judy Reyes, Karrueche Tran, Jenn Lyon, Kevin Rankin, and Jason Antoon, with Harold Perrineau and Dean Norris. The story centers on the diverse and dangerous staff of the Nail Artisan of Manatee County salon in South Florida. Desna Simms (Nash), along with her crew of manicurists, rises to power in the crime world to claim her share of cash and respect. It’s the story of hardworking women trying to get by in this economy, set against the surreal, bright, gritty landscape of Florida and the luscious, absurd, and extreme excesses of the crime world.

What do you think? Do you like the Claws TV series on TNT? Should it be cancelled or renewed for a fifth season?