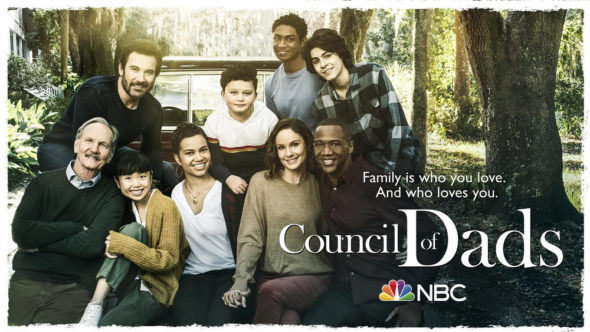 After the success of NBC’s This Is Us, the peacock seems to hoping that the new Council of Dads series will also be a hit in the ratings. Does this family drama have what it takes to survive? Will Council of Dads be cancelled or renewed for season two? Stay tuned. *Status update below.

Based on the book by Bruce Feiler, the Council of Dads TV show stars Sarah Wayne Callies, Clive Standen, J. August Richards, Blue Chapman, Emjay Anthony, Michele Weaver, Thalia Tran, Steven Silver, Michael O’Neill, and Tom Everett Scott. A loving father of five, Scott Perry (Scott) has his entire life’s plan thrown into upheaval by an unexpected health scare. He and his wife, Robin (Callies), call on a few of their most trusted friends to step in as back-up dads to help guide and support his growing family – just in case he can’t be there to do it himself. They include Scott’s most loyal friend, Anthony Lavelle (Standen); Scott’s tough-love AA sponsee, Larry Mills (O’Neill); and Doctor Oliver Post (Richards), Scott’s dedicated oncologist and his wife’s dearest friend. Scott’s kids include adult daughter Luly (Weaver), son Theo (Anthony), son JJ (Chapman), and adopted daughter Charlotte (Tran). Together, this group discovers that there’s more to being a father than anyone could do alone — and more to being a family than they ever thought possible.

What do you think? Do you like the Council of Dads TV series on NBC? Should it be cancelled or renewed for a second season?

*6/26/20 update: Council of Dads has been cancelled by NBC so there won’t be a second season.

Council of Dad’s is fabulous! A group of us love it and never miss it. We need more shows like this! It the best show on TV these days. PLEASE RENEW IT!
The cast is outstanding and the story lines are so well written & leave us begging for more each week!

Please do not cancel this show! It is one of the best on TV right now.

Definitely renew! My friends and I have watch parties every week!

Yes Council of Dads should be renewed

This show is awesome and I hope it gets renewed.

These are the shows we as viewers enjoy maybe you should change your demographics and ask the older than 49 years old what they think. This is a very good show and deserves a chance to succeed!

This is an amazing show! It is well written and the acting is excellent. I really hope it is renewed.

Love this show!! I think I cry after each show. Please keep it!!

Please have more seasons of Council of Dads! I love this show!

I love this show! PLEASE DON’T CAN CANCEL IT!

Please renew this series. I am really enjoying it, love the characters and the story line. Give it a chance to find it’s audience before prematurely canceling.

Love”Council of Dads”–hope there is a Season 2 am really looking forward to seeing how the Perry family moves on. Think the show will keep attracting more viewers.