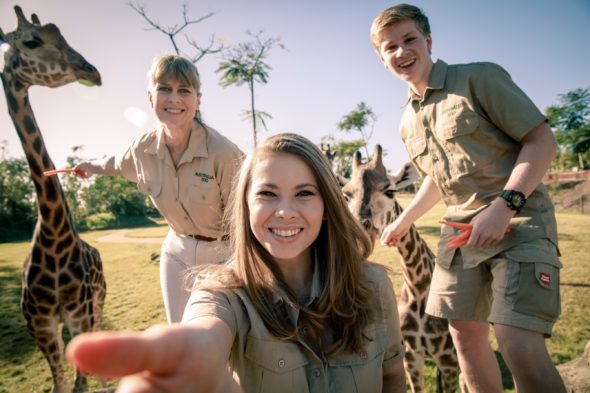 Terri, Bindi and Robert Irwin at the Australia Zoo.

The Irwins are returning to the small screen. Today, Animal Planet announced their new TV show Crikey! It’s the Irwins will premiere in October.

The docuseries “features the Irwins working together to care for more than 1,200 animals at Australia Zoo; overseeing a world class wildlife hospital, the largest of its kind in the world; and conducting high-octane global expeditions.”

ace up your boots because you’re about to embark on the journey of a lifetime with the family that’s bringing khaki back! The Irwins – Terri, Bindi and Robert – return to Animal Planet in a new series that gives audiences an all-access, front row seat to experience the sights and sounds of their thrilling wildlife adventures around the globe and the amazing animals that continue to inspire their conservation efforts. From running Australia’s largest family-owned zoo, Australia Zoo in Queensland, to crisscrossing the world protecting and celebrating the most wondrous animals on the planet, The Irwins work thoughtfully and tirelessly to carry on Steve’s mission to bring people closer to animals and ignite the connection that will ensure an abundance of wildlife for generations to come. CRIKEY! IT’S THE IRWINS launches as a global series premiere beginning Sunday, October 28 at 8pm ET/PT and will be seen in Animal Planet’s 360 million homes around the world.

CRIKEY! IT’S THE IRWINS features the Irwins working together to care for more than 1,200 animals at Australia Zoo; overseeing a world class wildlife hospital, the largest of its kind in the world; and conducting high-octane global expeditions. Animal Planet audiences ride along with Terri as she propels Steve’s conservation mission forward, which has included expanding the once two-acre Australia Zoo into a world-class 750+-acre zoo with 105 acres open to the public. Bindi, now 20 years old, focuses her passion for animals at Australia Zoo’s Wildlife Hospital, Australia’s best equipped wildlife treatment facility which rescues, rehabilitates and releases sick, injured, or orphaned native wildlife. Robert demonstrates a curiosity, deep knowledge and expertise for all the animals around him, as well as an infectious enthusiasm to share this experience with others; a memorable trait often showcased by his father.

In the season premiere of CRIKEY! IT’S THE IRWINS, among other stories, audiences will see Robert, after months of croc wrangling training with Steve Irwin’s best friend Wes, take the final step in his journey to feed Graham, a huge crocodile at the zoo’s famous Crocoseum. Originally rescued by Steve, Graham is the Zoo’s largest and most volatile big croc, with a history of dragging Steve Irwin into the water during a routine capture, and separately injuring Wes with a surprise death roll that left him hospitalized. Bindi helps tend to Cedar, a rescue koala that has given birth to a rare set of twin joeys who must now survive the 6 to 8-month period before they can leave Cedar’s pouch. Bindi and the zookeepers face ongoing challenges to keep the twin joeys alive as nature and survival of the fittest comes into play as one of the rarest types of koala pregnancies leaves the two joeys struggling and fighting for life.

During the season, Animal Planet viewers will witness a wide range of the joy and wonder of animals as the Irwins take on many projects, including the amazing transportation of a giraffe named Scarlett, who travels over 1200 miles to participate in a breeding program as a part of the Zoo’s conservation efforts, and the release of rescued and recuperated wildlife, including Eurong the turtle, Grub, the baby Echidna, and more. Viewers will also follow the family as they travel to locations that include the stunning Lady Elliot Island, the southernmost coral cay of the Great Barrier Reef.

What do you think? Are you a fan of the Irwin family? Will you watch their new TV show?

Love the show . Very interesting all the different animals they show and explain about them .

I watch the show very good and very interesting all the different animals the show.

Love the Irwins!! Love the show!! Enjoy watching.. It looks like a lot of fun caring for those wonderful animals..

YAHOOO!!!!!
Crikey! This is the best news ever~

So looking forward to this Wonderful Family carrying on Dad’s Legacy of caring for some of life’s Most Beautiful Creatures. Such a relief with all the hate and division in today’s society! THANK YOU IRWIN FAMILY, THANK YOU STEVE!!