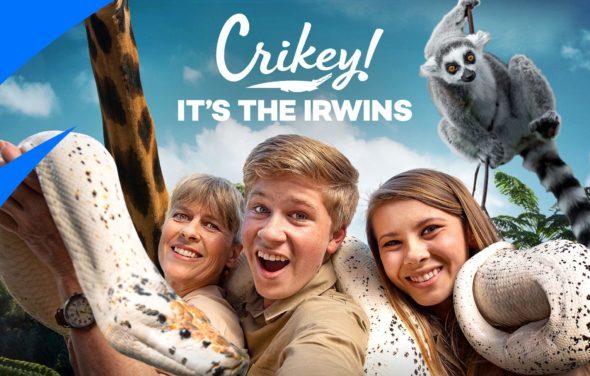 Crikey! It’s the Irwins is making a move. After airing for two seasons on Animal Planet, the series is ready to air its third season on Discovery+ – the new streaming service that launched earlier this month. The reality series follows the Irwin family as they continue the mission started by Steve Irwin, to bring animals and people closer together.

Discovery+ revealed more about the return of the series in a press release.

“Season three of the award-winning series, CRIKEY! IT’S THE IRWINS, featuring Terri, Bindi and Robert Irwin, and Bindi’s husband Chandler Powell, premieres Sunday Feb. 7 on discovery+, the definitive non-fiction, real-life subscription streaming service. discovery+ features a landmark partnership with Verizon that gives their customers with select plans up to 12 months of discovery+ on Verizon. A sneak peek of the premiere episode will air on Animal Planet directly out of Puppy Bowl XVII on Sunday, Feb. 7 at 5 PM ET/PT.

CRIKEY! IT’S THE IRWINS features the Irwin family as they continue Steve Irwin’s mission to bring people closer to animals and inspire them to become Wildlife Warriors to help protect and preserve our environment and its animals.

With this mission in mind, the Irwins continue to take up the mantle during the global pandemic as the new season opens with Terri delivering the much-anticipated news that Australia Zoo will finally reopen after being closed for 78 days due to COVID-19; Bindi and the team at the wildlife hospital find themselves in a desperate race to save a dozen corellas; and Robert witnesses the incredible birth of three tiger cubs.

Prior to the challenges of the pandemic, Australia faced devastating brushfires that wreaked havoc on the country’s landscape and wildlife population. The Irwins efforts to help as many animals as possible are the focus of a special episode. This season will also follow personal family milestones as newlyweds Bindi and Chandler prepare to welcome their own little Wildlife Warrior to the world, and Robert learns how to drive with the help of Terri and Bindi in his dad’s iconic old ute.

Other CRIKEY! IT’S THE IRWINS stories this season include Terri and Robert secretly trying to guess the sex of Bindi’s baby, while Bindi and Chandler have their own surprise in store; Bindi and Terri assisting the zoo’s dedicated vet team as they treat a multitude of animals at the Australia Zoo Wildlife Hospital; Robert continuing his father’s legacy as he faces off with Bosco, the most aggressive crocodile at Australia Zoo; Chandler stepping up during the croc show for Robert when an injury prevents him from participating; and Bindi and Chandler studying coral bleaching on the Great Barrier Reef. Additionally, four rescued Sumatran Elephants arrive to Australia Zoo from Indonesia, fulfilling a dream that began over 30 years ago when Steve and Terri decided to fight for the survival of this critically endangered species.”

Check out the trailer for Crikey! It’s The Irwins season three below.

What do you think? Are you a fan of the Crikey! It’s The Irwins TV show? Do you plan to watch the third season on Discovery+?

Yes I love the Irwin’s

Cannot afford to watch on the new channel.
PLEASE COME BACK TO ANIMAL PLANET.

I wish they did not leave Animal Planet — not everyone can afford to purchase streaming channels.

Love this series and would like to see this latest one and whatever they do in future but instead i appear to be watching a season from a few years ago on cable. They are so much younger, Robert & Bindi. Her husband is still her boyfriend:) I see on Instagram Bindi cradling her own 3-month-old baby girl♥️ Have not subscribed to Discovery+, but one day maybe the seasons already aired there will return to cable, as have a few of AMC+ and Paramount+ series.

Saddened that you left animal play for discovery plus, not all us seniors have or can afford to pay for more to stream your show on a phone or computer… We have a TV…. Sorry you left us

Where are Canadians supposed to watch Crikey It’s The Irwin’s? I have watched it from day one on the Animal Planet

It’s a shame they decided to go with streaming. They have let a lot of their fans doen. Won’t pay more to watch tv than I already do.

I love the show but I will not be purchasing Discovery Plus streaming service.

Yeah, I have loved this family since before Bindi was born, it’s not a huge amount of $$, a Starbucks Venti or 2 and the show is better for me, I’m more relaxed and happy after watching it. If Discovery drops them, then I drop Discovery. And, I think Animal Planet canceled the show, so they chose to go this route. They have to make money to keep feeding the animals, staff and themselves & their crew.

Really disappointed for all the shows on this streaming service now. Watched a majority of them but guess I will no longer. Not paying more when I already pay too much!

I am very disappointed the Irwin’s are moving to a streaming service. I refused to pay more so I guess I will not see them anymore. Bad decision.

No. I was a fan, but I refuse to pay extra for Discovery Plus. They lost me as a fan.

We absolutely Love this show. With the “messages” that are on TV now my husband and I were always mad,uptight, going to bed upset. I decided were going to watch The Irwin’s at night and it’s awesome. Our world is ugly now but watching this show makes you feel there are still a few beautiful things in this world. Thank you for doing another new season