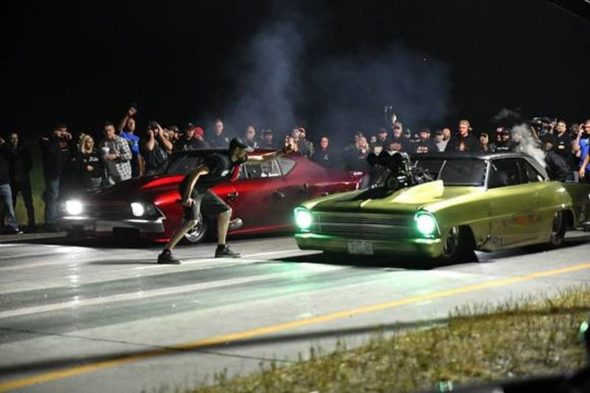 Street Outlaws: Mega Cash Days is coming soon to the Discovery Channel and the discovery+ streaming service. The new all-star racing series will arrive later this month, and it will be hosted by Chris Hamilton.

Discovery Channel revealed more about the upcoming series in a press release.

“All of the STREET OUTLAWS all-stars are back, but this time, it’s every man or woman for themself. While no strangers to the popular Cash Days, these drivers have never seen a double elimination competition to this scale. With more racers and more money on the line, they’re gearing up for a MEGA race with A $600,000 prize pool on the line. Hosted by race-master Boosted GT (Chris Hamilton), STREET OUTLAWS: MEGA CASH DAYS is the most lucrative ever — with 64 of the fastest drivers from all over the country going head-to-head.

Birthed from the earlier years, before OKC had its own television series, Cash Days has grown with popularity to include more racers and more money. Now, 64 of the most accomplished drivers from the STREET OUTLAWS universe, including names like Daddy Dave, Ryan Martin, Lizzy Musi, Mike Murillo, Birdman, Kye Kelley, Precious Cooper, Murder Nova, and more, converge on one road in Scottsbluff, Nebraska to “go all in” on the most gigantic Cash Days in STREET OUTLAWS history.

And, for the first time in almost three years, longtime rivals JJ Da Boss of The Memphis Street Outlaws and Big Chief of The 405 share the screen and the road, making this a can’t miss opportunity.

This double elimination event, broken into brackets, means winners take home $5,000 per race and $100,000 for the final race. But unlike other competitions, if a driver has a bad night of racing, it’s not totally over – they can come back and win the entire thing via the “losers bracket.”

Will Daddy Dave capture his fifth title and add another notch to his illustrious Cash Days belt? Can Big Chief finally grab that elusive crown he has been seeking for almost a decade—or will it be one of the other 60+ worthy racers who drive home with the money as mega cash days king?”

What do you think? Do you plan to check out the Street Outlaws: Mega Cash Days TV show on discovery+ or Discovery Channel?

Who is JJ married to? Been watching Mega Cash, but I’ve also watched all the Street Outlaws shows. Love it. To me JJ’s and the 405 teams are the best/fastest. Motor on and be Safe..

I love Street Outlaws, Memphis & New Orleans.
I hope either Trish in Heffer, or Lizzy in Aftershock wins. Or JJ in Ole Heavy or Kye in Showstopper. MSO & NOLA 4 LIFE.

I am looking forward to see either( MSO) or ( NOLA ) WIN. My fav is MSO, but I love NOLA too. I hope either Trish, or Lizzy wins.
Street Outlaws Memphis, & New Orleans 4 Life.

Yes! This will be awesome!! Can’t wait to watch!