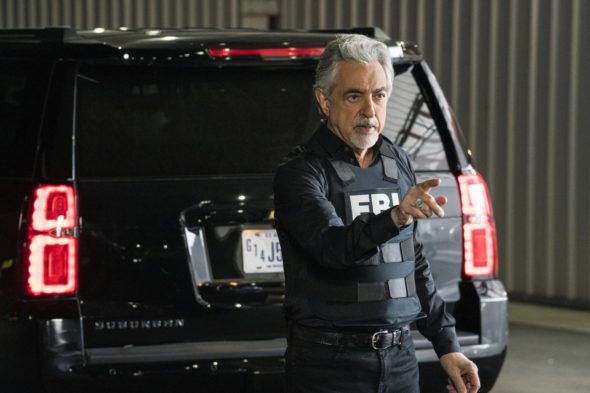 Criminal Minds is getting ready for its end. A double episode series finale will air next Wednesday night, and CBS has now released details about both episodes for viewers of the series. Fans should expect some characters that departed the series to return for the big send-off.

CBS shared the following details about the episodes:

“Face Off” – It has been a year since Rossi nearly died at the hands of Everett Lynch, a.k.a. “The Chameleon,” and he has developed some new theories, with inspiration from his former partner, Jason Gideon (Ben Savage). The BAU team sets out on an epic hunt to capture Lynch, in the cliff-hanger to the series finale episode of CRIMINAL MINDS, Wednesday, Feb. 19 (9:00-10:00 PM, ET/PT) on the CBS Television Network.

“And in the End” – Following an explosive face-to-face encounter with Everett Lynch, a.k.a. “The Chameleon,” Dr. Reid suffers from a brain injury and, while experiencing hallucinations, is visited by ghosts from his past. Also, the BAU makes a shocking discovery about Lynch that affects Rossi personally, and the entire BAU team comes together to celebrate Rossi’s retirement, on the series finale of CRIMINAL MINDS, Wednesday, Feb. 19 (10:00-11:00 PM, ET/PT) on the CBS Television Network. Written by executive producer Erica Messer and series star Kirsten Vangsness.

What do you think? Are you sad to see Criminal Minds end?

I’m very sad the show is ending. I have watched the complete series two times complete. Will probably watch it again soon. Wish they would bring it back.

Not a happy camper on this stupid decision. Good shows they remove and leave stupid shows. What the hell is wrong with you

No you shouldn’t have ended it there’s to many good shows leaving and having dumb ones take its place please do not make and more realities shows bring back family shows please
Thank you and yes I’ll miss everyone on criminal minds .love them all

I LOVE the cast of Criminal Minds! So very sorry to see it end. Please consider a reunion or movie for the fans in the future!

Soooo sad Criminal Minds is ending!! The actors, the plots, the show= it’s all better than its ever been.
If it was doing badly I could see it. But it’s excellent & loved by so many. It seems to be excelling in every way. And you decide to take it off the air??? We are all shocked and saddened. Cut to the core! What a mistake…..

I will miss this excellent show! I have watched every episode thru the entire run. Sad it is leaving. Maybe the actors want to branch out to do other things. This has been one of my very favorite series ever put on TV and I will miss it.