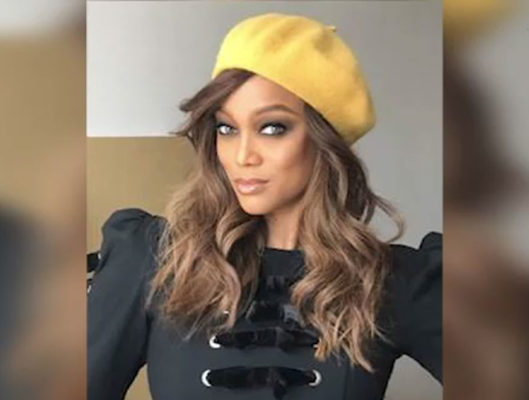 Earlier this week, we reported that Tom Bergeron and Erin Andrews had been dropped as the long-standing hosts of Dancing with the Stars. It’s difficult to imagine the dancing competition without them but ABC is hoping that viewers will welcome Tyra Banks as the new host.

Banks, who will also be an executive producer on Dancing with the Stars, is no stranger to hosting. She previously created, executive produced, and hosted/judged America’s Next Top Model and was a host for two seasons on NBC’s America’s Got Talent. Banks also had her own talk show, The Tyra Banks Show, which aired on The CW for five seasons.

Here’s ABC’s announcement about Banks becoming the new host of Dancing with the Stars:

After 28 Seasons, Tom Bergeron Passes the Baton and, Along With Erin Andrews, Bids Farewell to the Show

ABC and BBC Studios’ Los Angeles production arm announced today that after 28 seasons, Tom Bergeron will exit “Dancing with the Stars,” with Erin Andrews also departing. Supermodel and businesswoman Tyra Banks will be welcomed into the ballroom as the show’s new host and executive producer.

In collaboration with the show’s executive producer/showrunner, Andrew Llinares, Banks will bring her energy and inspiration to the creative refresh the team is planning while honoring the show America loves.

“I’ve been a fan of ‘DWTS’ since its beginning … The fun mixed with raw emotion, seeing celebrities push past their comfort zones, the sizzling dance performances … it’s always transported me to my days of turning it up 10 notches on the catwalk,” said Banks. “Tom has set a powerful stage, and I’m excited to continue the legacy and put on my executive producer and hosting hats.”

“Tom has been an integral part of the ABC family for nearly two decades, from hosting ‘AFV’ to ‘Dancing with the Stars’ – we are grateful for all he and Erin have done to make ‘Dancing’ a success,” said Karey Burke, president, ABC Entertainment. “As we gear up for the show’s 29th season, we can’t wait to welcome Tyra Banks to our ‘Dancing’ stage. Tyra is an award-winning multihyphenate whose fierce female prowess and influence across many industries have made an indelible mark. Her fresh take on America’s favorite dancing competition will surely bring more than a ‘Smize’ to fans everywhere.”

Valerie Bruce, general manager, LA Productions, BBC Studios, said: “Tyra Banks is an icon whose powerful presence, trademark confidence, and industry-leading achievements inspire us. We are proud to partner with ABC to welcome her as the new host of ‘Dancing with the Stars.’ This represents a landmark moment in our 28 seasons producing ‘Dancing with the Stars’ as we take this iconic show in a new creative direction. We offer our sincere thanks to Tom and Erin, whom we will always consider part of the ‘Dancing with the Stars’ family.”

“Dancing with the Stars” is the hit series in which celebrities perform choreographed dance routines that are judged by a panel of renowned ballroom experts. The series averaged 9.1 million Total Viewers last season after 35 days of viewing across linear and digital platforms.

About Tyra Banks
Tyra Banks is the content creator of our time. The supermodel turned super businesswoman has a long list of firsts, prestigious awards, and business and educational endeavors. Banks was the first African American model featured on the cover of Sports Illustrated’s swimsuit edition in 1996, 1997, and yet again in 2019.

Tyra was named one of The Hollywood Reporter’s 100 Most Powerful Women in Entertainment, Entertainment Weekly’s 25 Smartest in Television, and was America’s No. 1 host two seasons running on “America’s Got Talent.” She was listed twice on Time magazine’s 100 Most Influential People in the World. In addition to being honored as one of Glamour magazine’s coveted Women of the Year award, she received two Emmy® Awards for “The Tyra Banks Show,” the first show ever to receive the award in the new informative category.

After launching The Tyra Banks Company, she graduated in 2012 from the Owner/President Management program at Harvard Business School. Since 2017, Tyra has shared her expertise and knowledge of personal branding as visiting professor at Stanford Graduate School of Business.

Her latest venture, ModelLand, is a first-of-its kind experiential company that combines immersive theater, experiential shopping, and playful culinary delights that live at the intersection of the fashion and entertainment worlds. With plans for domestic and international expansion, the flagship 22,000-square-foot location in Los Angeles will be a destination for tourists and locals, and have activities for all ages to enjoy. Tyra Banks is represented by UTA.

About ABC Entertainment
ABC Entertainment airs compelling programming across all day parts, including “Grey’s Anatomy,” the longest-running medical drama in prime-time television; riveting dramas “The Good Doctor,” “A Million Little Things” and “Station 19”; trailblazing comedy favorites “American Housewife,” “black-ish,” “The Conners,” “The Goldbergs” and “mixed-ish”; the popular “Summer Fun & Games” programming block, including “Celebrity Family Feud,” “Holey Moley,” “Match Game,” “Press Your Luck” and “To Tell the Truth”; star-making sensation “American Idol”; reality phenomenon “Shark Tank”; “The Bachelor” franchise; long-running hits “Dancing with the Stars” and “America’s Funniest Home Videos”; “General Hospital,” which has aired for more than 55 years on the network; and late-night talk show “Jimmy Kimmel Live!”; as well as the critically acclaimed, Emmy® Award-winning special ”Live in Front of a Studio Audience: Norman Lear’s ‘All in the Family’ and ‘The Jeffersons.’” The network also boasts some of television’s most prestigious awards shows, including “The Oscars®,” “The CMA Awards” and the “American Music Awards.”

What do you think? Are you a fan of Dancing with the Stars on ABC? Do you think Banks is a good choice to host the series?

Who knows, might be better, might be worse. I’ll give it a shot. But if they play too much hip-hop/rap stuff; it’ll get shut off

Nope. I’m done with this show. I’ll be surprised if it lasts one more season.

Big mistake! Tyra was so bland & blah as hostess of AGT for her two years!! Was she fired or did she leave on her own?

Before anyone starts to calculate how Tom and Erin’s run on the show stacks up to other longtime hosts, it needs to be said: DANCING WITH THE STAR is only entering its 15th season, not its 29th. The show started in 2005. TV seasons last a year, not a half year, no matter how reality shows have decided to calculate it. So Tom and Erin’s fourteen years on the show is not even near a record for hosts. (And SURVIVOR will be entering its 21st season, whenever they choose to bring it back–not its 41st. And as of the fall,… Read more »

No I believe we have a better host, to bad the executive chose her, now I know not even 2 million will wach the show I will be one for sure, but maybe the executive will rethink and get some else

No we have a better host

Ms. Banks is not welcome to DWTS.
Tyra does not being with this show.
I am not watching it.

I agree wholeheartedly. Tom Bergeron was an excellent announcer. If the producers treated him so poorly by firing him after 28 seasons, viewers should likewise fire this show. What’s wrong with this show was not Tom Bergeron and Erin Andrews but the unfair method by which eventual winners are selected. Two seasons ago a man, who had little dancing ability, won the season, resulting in the show losing a tremendous amount of credibility.

I won’t be watching it now!!!
Can’t believe she’ll be the new host!
Ridiculous

I’m guessing ABC saw the reaction to getting rid of Bergeron, and put out the news of Tyra taking over real quick so the furor dies down before the season starts.
She is no Tom, but in my opinion she is just as good as any of the last three female hosts. Yes Erin was better than the previous two but still lacking in the personality department.

Tyra hosted AGT for 2 seasons, not one. (I also hate the idea of her hosting DWTS).

Agreed. Will not watch anymore.

I dont think Tyra Banks is a good choice for DWTS. Never watched America’s Top Model, but we are fans of AGT, and the time she spent hosting that show, was a disaster. Ever think why she was replaced? Time will tell, but I dont have high Hope’s for this being a successful choice.

I have absolutely no desire to continue watching a show that was one of my most beloved series of all times…..never missed an episode, it was like a family. How dare the powers that be decide to change a show that was so highly rated and obviously loves…..there was a reason for those high ratings and they are slapping the faces of all those fans. Hope it fails.

My favorite show NO MORE. HORRIBLE MISTAKE FIRING 2 BELOVED HOSTS TOM AND ERIN. TOM MADE THE SHOW WITH HIS GREAT COMEDY. NOT WATCHING UNTIL THEY BRING BACK TOM AND ERIN.

Big mistake!!! Have no clue what ABC was thinking!!

Think hard & you’ll get it. Eventually this will happen to a lot more shows!

Are you serious? Think…….

I wish I could see the show but I don’t get Epix.

Having been a long time fan of dancing with the stars I guess I watched my last season good luck with your new Audience. The saying goes if it ain’t broke don’t fix it